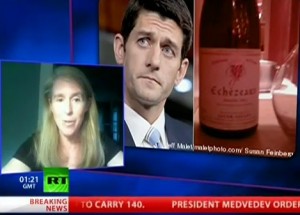 On Friday, we reported that Economist and Rutgers associate business professor Susan Feinberg busted Rep. Paul Ryan’s chops over his dinner tab at Washington’s Bistro Bis, confronting the Congressman after his meal for partaking in $350-a-bottle wine, while his party seeks painful cuts to government programs for senior citizens and the poor. On Monday, liberal radio and TV host Thom Hartmann interviewed Ms. Feinberg about her wine-sleuthing, meal-interrupting ways.

Hartmann opens by noting the poor optics involved in ordering $700 worth of wine with your buddies “while you’re busy discussing how to screw poor people and privatize Medicare,” and on that count, I say fair enough. Hot Air‘s Allahpundit tried to equate this story with Michelle Obama’s recent burger run, and while there are significant differences, both stories do tend to superficially reinforce ideas that their subjects’ opponents have already formed. I would also argue that Ryan’s actions were not hypocritical, but entirely consistent with his principles. During the interview, Feinberg says she asked him how he can live with himself, but from Ryan’s point of view, that $700 worth of wine is going to trickle right down to some minimum wage family. In France.

Feinberg doesn’t fare much better than Ryan, though, even in her own retelling of the story: (From The Big Picture with Thom Hartmann)

Does it bother me that Paul Ryan drank a glass of $350 wine? Not especially. In fact, if I saw him swilling a Bud Light at a local dive bar, I’d probably mutter, “F***in’ condescending poser,” but no matter where Ryan is, or what he’s drinking, his budget plan still sucks. The optics work either way, an indication of how substantive this kind of story is.

Speaking of condescending, though, Ms. Feinberg’s description of her thought process as her outrage gathered was a little bit hard to take. Unless I missed the part of the story where she and her husband were monitoring Ryan’s meal from a nearby soup kitchen, she was in the same restaurant, enjoying an $80 bottle of wine. Her description of the plight of a two-income, minimum wage-earning couple as amusing time-killing banter isn’t redeemed by the fact that she mustered up enough outrage to start a shouting match with Ryan and his companions. It will likely serve only to touch off a rash of well-heeled liberals being harassed while they try to eat dinner. If you want to criticize someone for “letting them eat cake,” it helps not to have moist bits of sponge and butter cream flying out of your mouth while you do it.