Trump Goes Off on Morning Joe, Calls Mika Brzezinski ‘Psycho’: ‘They Helped Get Me Elected’ 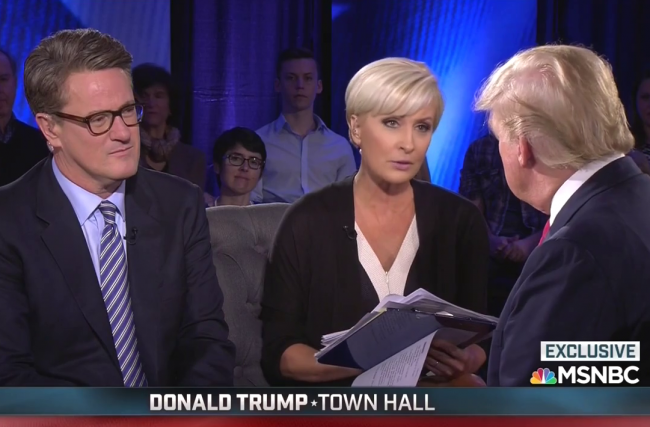 President Donald Trump ridiculed MSNBC’s Morning Joe via a Tuesday morning tweet, calling out what he deemed to be flagging ratings and referring to co-host Mika Brezizinksi as “Psycho.”

Mr. Trump was elected president in November of 2016 and, with that role, is considered by many to be the “leader of the free world” and “Commander in Chief” of U.S. Military. And yet, the media-focused resident of the White House still finds ample time for his hobby as a media critic.

Trump appeared many times on Morning Joe during the run-up to the 2016 general election, which earned criticism by some that the MSNBC morning show was somehow carrying water for, or normalizing, Trump’s run as a very non-traditional candidate. Or as Trump claimed via tweet: “they helped get me elected.”

During the election, Morning Joe’s point of view changed rather dramatically to one that consistently voiced harsh criticism of the president — and eventually often suggested mental illness. Not surprisingly, Trump has stopped appearing on the show, which he believes is behind the crashed ratings and “very small audience.” Trump tweeted:

Wow! Morning Joe & Psycho ratings have really crashed. Very small audience. People are tired of hearing Fake News delivered with an anger that is not to be believed. Sad, when the show was sane, they helped get me elected. Thanks! Was on all the time. Lost all of its juice!

Trump is known to be something of a connoisseur of cable news programming, and his favorite show has been reported to be Fox & Friends. Unless there was any confusion about Trump’s favorite morning show, he followed by tweeting:

Are Morning Joe’s ratings down? Well not really. The first three months of 2019 saw the MSNBC program enjoy record viewership, while CNN and Fox News shows were down from 2018. Morning Joe’s second-quarter numbers are down only slightly from Q1, and that seasonal dip was rather insignificant: Joe and Mika still enjoy more than 1 million viewers per day on average.

Just reminded my staff that Morning Joe & Psycho were with me in my room, at their request, the night I won New Hampshire. Likewise, followed me to other states….

….Don’t watch show, but heard Mika said I asked to preside over their marriage. Not true—does anyone really believe that? They were married by Elijah, King of Baltimore!

UPDATE: Brzezinski fired back with a few tweets of her own after rebuking Trump’s attacks on air.

We were there, reporting. Spent most of our time with Hope and Corey Downstairs but we did drop by and it was Fascinating! Have a good day with #MushyMark @MarkMeadows https://t.co/ZsjCrwddBE

Remember you were arguing over it with Jared? Gosh that seems like such a long time ago! Have a great day with #MushyMark https://t.co/K7eIOk5mIH