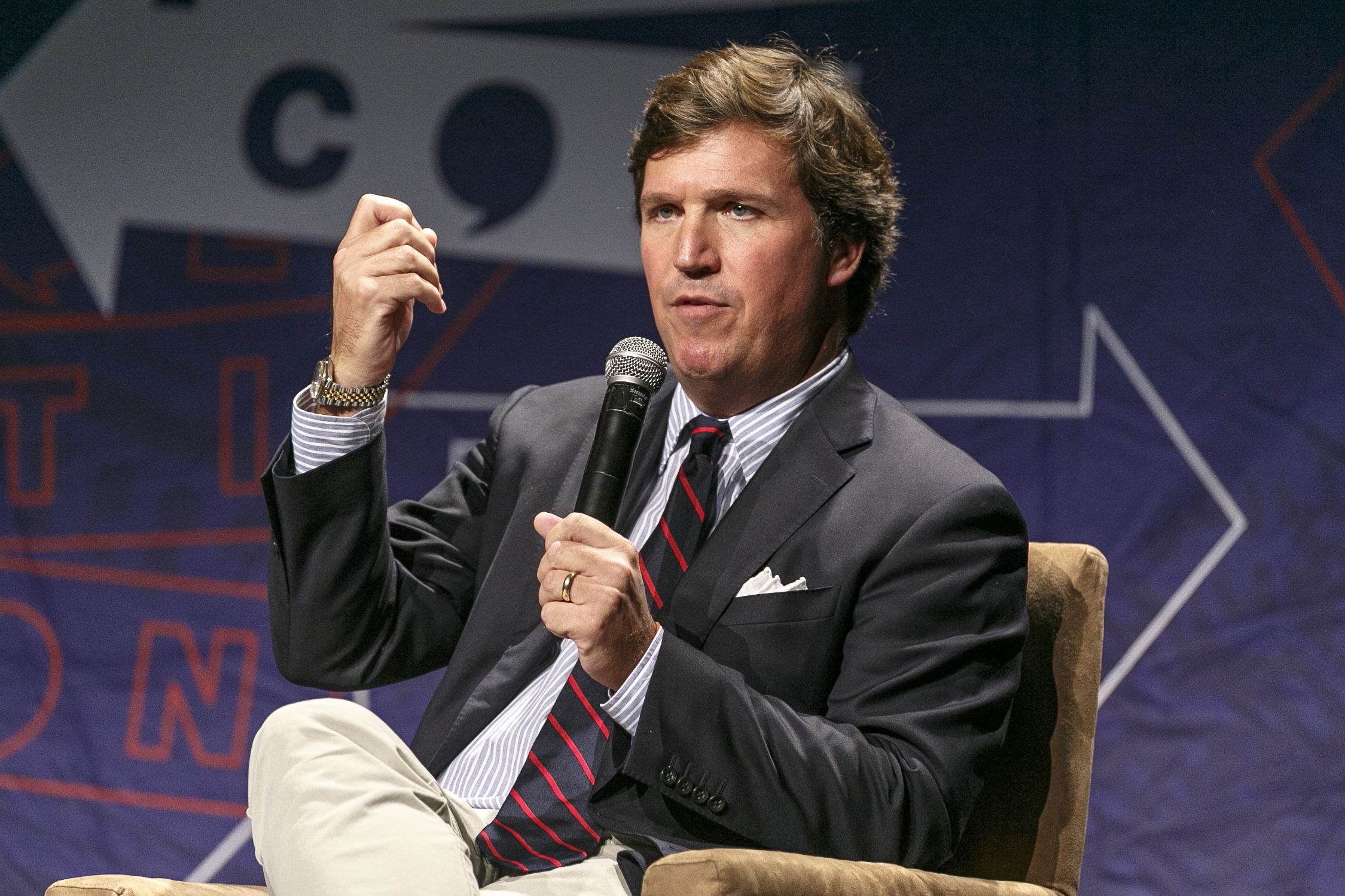 Last week, Fox News star Tucker Carlson accused Republicans of rejecting economic patriotism out of fear they “might make the Koch brothers angry.” While he now castigates those lawmakers as being in the pocket of big Koch, Carlson himself has a long history of ties to the billionaires’ vast network.

Contempt for Koch money has become a recurring theme on the 8 p.m. hour of Fox News prime-time. But Carlson once decried critics of Charles and David Koch, critics who attacked the billionaires in the same way he does now. Notably, Carlson warned in 2014 that Democrats were nearing McCarthyism after then-Senate Majority Leader Harry Reid called Koch influence in politics “un-American.”

Carlson launched his latest broadside against the Kochs during a June 5 segment praising Democratic presidential candidate Elizabeth Warren’s “plan for economic patriotism,” which he used to hit Republicans not in favor of President Donald Trump’s trade policies.

“Republicans in Congress can’t promise to protect American industries. They wouldn’t dare. It might violate some principle of Austrian economics. It might make the Koch brothers angry,” said Carlson.

He went on to note that Republicans are forced to appease “libertarian ideologues” to ensure they continue to benefit from powerful donors like the Kochs, who “fund most Republican campaigns.” What Carlson conveniently omitted, however, is that before his newfound crusade against the elites, his rise in conservative media was closely tied to the Koch orbit.

Carlson started his career as a fact-checker at a now-defunct conservative journal published by the Heritage Foundation, a conservative think tank that receives Koch funds. He went on to become a prominent magazine writer, publishing pieces in Esquire, the New York Times Magazine, and the Weekly Standard. After hosting shows on CNN, PBS, and MSNBC as their resident conservative throughout the 2000s, Carlson became a senior fellow at the Charles Koch-founded and Koch Industries-funded Cato Institute in 2009.

“When I moved to Washington, I discovered that my impression of Cato had been right: The people I met there were some of the smartest, bravest and most interesting in the city. While others are blinded by expedience or group think, Cato stands on principle, always. I’m honored to be affiliated with it,” Carlson’s said when he joined the libertarian think tank, where he remained until 2015.

He became a contributor at Fox News during his time at Cato and appeared on the network to defend the Koch brothers against criticisms of their massive political influence and the environmental effects of their oil and gas companies. Carlson appeared on Special Report in 2014 and criticized liberal attacks against the Koch brothers as “dangerous,” adding, “Who’s ever heard of Charles and David Koch? Is this really going to move voters?”

Several weeks after those comments, Carlson responded with shock and outrage after Harry Reid criticized the Koch brothers on the Senate floor.

“I remember vividly growing up in a liberal world where ‘un-American’ was a word that liberals hated. It was identified with the McCarthy era,” said Carlson, a weekend Fox & Friends host at the time. “The one thing you weren’t allowed to call someone was un-American, and now the Senate majority leader calling people un-American just for contributing to political causes — what is that!?”

The Fox News host’s ties to the Koch network also include their funding of the Daily Caller, a conservative online tabloid co-founded in 2010 by Carlson and former Dick Cheney advisor Neil Patel — along with initial funding provided by conservative businessman Foster Friess, who has given millions to Koch-backed causes. The Daily Caller is divided into a “for-profit, independent news” side and a non-profit “News Foundation” side funded by donors.

Funding isn’t the only notable connection between Carlson’s tabloid and the Kochs. The billionaire brothers were once accused of trying to smear a journalist with a planted story in outlets including the Daily Caller, which was being run by Carlson at the time.

After New Yorker investigative reporter Jane Mayer published one of the first exposes of the Koch network in 2010, unknown figures tried to plant a fake plagiarism story in the Daily Caller in retaliation. The instigators behind the attempted smear approached Daily Caller reporters, who looked into the false claims for weeks. They ultimately dropped the story after the New York Post and other mainstream outlets revealed they too had been approached by a source offering sensationalist dirt on Mayer.

In her 2016 book Dark Money, Mayer wrote that the people trying to plant the plagiarism smear were former law enforcement officials hired by the Koch network who picked the Daily Caller as their “chosen receptacle.”

“In two of the four stories I was alleged to have ‘plagiarized,’ I had specifically given credit to the authors whose work the Daily Caller was claiming I’d stolen,” she wrote.

The Daily Caller has also published numerous posts pushing back against criticism of the Kochs’ political influence while also promoting their agenda. Until relatively recently, these posts failed to disclose the outlet’s financial ties to the Kochs.

Carlson has spoken at numerous events for the Koch-funded American Legislative Exchange Council (ALEC) over the years, including a 2009 function where Carlson accepted a journalism award from the national think tank. The Fox News host has also headlined rallies held in connection with the Koch-backed advocacy group Americans for Prosperity (AFP), including their Obama Failing Agenda Tour in 2012 and a rally in 2014 billed as “a message to the Left that we know the truth and support free market solutions.”

These days, Carlson blames free markets for decimating the American middle class, pushing the U.S. manufacturing industry overseas, and even contributing to the breakdown of morality.

While he hasn’t spent much time on his Fox News show dwelling on his road to Damascus moment, Carlson has spoken about his evolving views in several interviews. Speaking to The Intercept in 2017, Carlson noted his views were “always changing.”

“One’s views ought to change,” he said. “You ought to look up every once in awhile from your ideology and measure it against the results that you anticipated, and ask yourself, ‘Is this working? Are my preconceptions, my assumptions — are they still valid?'”

He often points to Trump’s election as a catalyst. In a Vox interview in January, he called Trump’s political rise as a “smoke alarm … telling you the building is on fire, and unless you figure out how to put the flames out it will consume it.”

The launch of Carlson’s prime-time Fox News program also coincided with Trump’s presidency: Tucker Carlson Tonight began airing a week after Trump took office and quickly became both a viral vehicle for his new populist beliefs as well as one of the top three cable news shows. With Trump wavering on many of his populist promises early on — choosing tax cuts for billionaires and Raytheon cruise missiles for Syria instead — Carlson filled the niche as one of the only major conservative voices to hit the president for reneging on his platform.

“[Trump] ran for office promising to fix immigration, make good deals and, in general, do a better job than the corrupt, incompetent lawmakers, he said, were wrecking the country. And he was right,” said Carlson. “In a remarkable twist, the president held a televised meeting with the very swamp creatures he once denounced.”

During his interview with Vox, Carlson admitted to previously being “so blinded by this libertarian economic propaganda that I couldn’t get past my own assumptions about economics.” His explanation for this latest ideological 180 echoes a previous one: his abrupt pivot from supporting the Iraq War to vehemently opposing it. “I’m ashamed that I went against my own instincts in supporting it,” he said in 2004, just one year after disparaging those opposed to the conflict anti-American.

With his apostasy from market libertarianism and neoconservative warmongering complete, Carlson’s more remarkable commentary involves his actively fighting against those ideologies — often rejecting them in the same sentence. “Republicans have considered it their duty to make the world safe for banking, while simultaneously prosecuting ever more foreign wars,” he wrote in a January op-ed slamming Mitt Romney. Last year, he published a bestselling book condemning elites, titled Ship of Fools.

Still, the Fox News host is adamant he isn’t a populist. “I’m not even making the case for an economic system in particular,” he told Vox. Instead, he describes himself as “just a talk show host” asking the hard questions: “I’m just saying… a country where a shrinking percentage of the population is taking home an ever-expanding proportion of the money is not a recipe for a stable society.”

Since Carlson’s turn away from Koch money, the one time he has been called out on-air for his past life advocating for billionaires’ tax cuts was on a segment of his show that never aired. Dutch historian Rutger Bregman was invited on Tucker Carlson Tonight in January after going viral for his speech at Davos calling out the billionaires in attendance for tax dodging. Bregman challenged Carlson’s populist persona in their combative interview, called the host “a millionaire funded by billionaires” and brought up his “dirty money” from the Kochs and News Corp CEO Rupert Murdoch. The interview never aired, but in a tape recording posted online by Bregman, Carlson curses out his guest before spiking the segment.

One old quote from Carlson, which might shed some light on his transformation, was made at a 2009 speech for the Koch-backed ALEC.

“People under thirty are very caught up in the idea of phoniness and hypocrisy. My kids get very upset by phoniness: I embrace it,” he said, to laughs from the audience. “I mean that with all sincerity.”