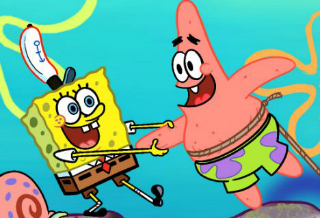 If you were to listen to Ukraine’s National Expert Commission for Protecting Public Morality, you’d believe that the Eastern European country’s children are under attack from the menace of… American cartoon shows like Spongebob Squarepants and Family Guy that promote the homosexual agenda and the “destruction of the family” — you know, the stuff conservative Christian activists and groups over here in the States complain about on a daily basis (and occasionally proceed to accidentally light a pro-gay company’s lawn on fire).

The commission is especially concerned with banning the long-running Nickelodeon cartoon Spongebob because they believe (like everyone else) that the titular squeaky-voiced character has a homoerotic relationship with his best friend, a goofy pink starfish named Patrick, with whom the sponge is regularly depicted holding hands.

The bureaucrats also find disturbing the fact that Mr. Squarepants — an animated sponge who works at an underwater burger restaurant — lives in a pineapple under the sea (absorbant and yellow and porous is he), and takes boating lessons from a teacher named Mrs. Puff, who happens to be a blowfish. What’s so offensive there? Well, “puff” is a term often used to describe a gay man, as if Ukrainian children knew that. (Come to think of it, isn’t SpongeBob’s grumpy neighbor Squidward a bit phallic?)

The group also takes aim at the popular British children’s show, Teletubbies because they believe it creates “an imbecile who will sit near the screen with an open mouth and swallow any information.” Ouch, tell that to my 4-year-old cousin. The report warns that male teletubby Tinky Winky carries what some believe to be a woman’s handbag. “In real life, boys very rarely want to put on girls’ clothes,” writes the commission.

Some of the other dastardly shows under fire include Fox’s adult cartoons Family Guy and The Simpsons, and… Pokémon? The first two are obviously, as the report claims, “projects aimed at the destruction of the family, and the promotion of drugs and other vices.” But Pokémon? I guess it’s all in the name, which only sick perverts would interpret as “poke a man,” or something? Or because the human characters throw balls at each other. I don’t know. I’m trying here.

If all these morality police-like complaints sound awfully familiar to Americans, it’s because they are. Conservative Christian groups here have been whining about these shows for years (for instance, in 1999, Rev. Jerry Falwell complained that the “gay” Tinky Winky teletubby was flat-out “bad for children“). It seems like Ukraine is just fabulously late to the party.

Luckily for us, the difference is that in America the whiners are usually just independent organizations and not actual government agencies.