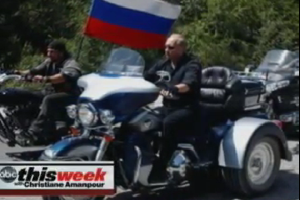 Vladimir Putin, free speech advocate? The Russian prime minister is hitting back on the West, hard, for their treatment of Julian Assange, bemoaning the death of Western democracy in light of his arrest in Britain for an Interpol warrant out for “sex crimes.”

Putin is undoubtedly one of the protagonists of many of the “cablegate”  leaks, which revealed, among other things, that Putin maintained a manly “bromance” with Italian premier Silvio Berlusconi and that American ambassadors considered him the “Batman” to President Dmitry Medvedev‘s “Robin,” and his country a “mafia state.” While he has said that the cables won’t affect U.S. diplomacy, he is coming out strong for Assange– lashing out at the West for their cold welcome of the new files. With a colorful aphorism, he said he’d like to “shoot the puck back at our American colleagues” and added, “You know what our villagers say: while someone’s cow is mooing, yours better be silent.”

That latter phrase, according to ABC News, means something to the effect of our pot/kettle analogy, and was reinforced by his more serious comment that “if there is democracy, it must be a full one. Why did they jail Mr. Assange? Is that democracy?” While he didn’t go as far as to defend Assange– much less defend the Russian “democracy”– he did make the point that, had Assange been jailed for publishing information, that would fly in the face of the idea of a free society. Someone should probably tell him Assange wasn’t arrested for publishing documents.

Meanwhile, Putin is starting the rumor that he may run for President yet again in the next cycle, depending on whether he and the current president can agree on who should step aside. ABC News also compiled a report of all the manly pseudo-campaign activities Putin has been up to, including the eerily familiar sounding huntin’, fishin’, and puttin’ out fires: