VP Joe Biden Comes Out In Favor Of Gay Marriage, Name-Drops Will & Grace 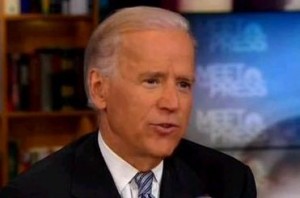 During an appearance on Meet the Press earlier today, Vice President Joe Biden argued passionately in favor of full same-sex marriage rights, indicating a shift in position for the VP. Biden made sure to clarify that these were his personal views and not necessarily the views of the Obama administration, but he did talk at some length about how perceptions of gay people have changed over time thanks to TV shows like Will & Grace.

RELATED: VP Joe Biden On GMA: “Gay Marriage Is Inevitable,” But Tax Cuts? Not So Much.

David Gregory started by noting that Biden has previously gone on record saying he is not in favor of gay marriage, but he asked the vice president if his views have evolved since then. Biden spoke from the heart about why he now believes that gay and lesbian Americans deserve all the same rights as everyone else.

“As more and more Americans come to understand what this is all about, it’s a simple proposition. Who do you love? Who do you love? And will you be loyal to the person you love? And that’s what people are finding out and it’s what all marriages at their root are about, whether they’re marriages of lesbians or gay men or heterosexuals.”

Biden clarified that President Obama sets the White House’s policy agenda, but he said that he personally believes that gays and lesbians should be granted “the same exact rights” as everyone else. He defended Obama’s record on gay rights, including striking down Don’t Ask, Don’t Tell.

The vice president also brought up the changing cultural and social mores surrounding gay people in American society, especially from our sources of entertainment. Biden name-dropped Will & Grace as an example of a show that “did more to educate the American public” about gay people than what most others have been able to do.