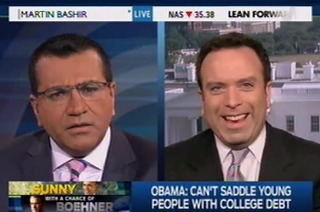 Unsurprisingly, Martin Bashir misled his audience today. Somewhat surprisingly, he was able to rope Washington Post columnist Dana Milbank into playing along. But the shame here is not Milbank’s loose portrayal of the truth; it is that he knows better. One assumes, he simply does not think enough of Bashir’s audience to set the record straight.

Bashir began his segment by observing adroitly “Republicans hate the lame-stream media.” Therefore, presumably, they should approve of the executive branch of government targeting reporters in unprecedented fishing expeditions designed to intimidate their sources.

Milbank replied that the average Republican does mistrust journalists, as distinct from the political media establishment, but they are only concerned about this enormously troubling scandal because one of the journalists targeted works for Fox News. Furthermore, they are primarily motivated by the opportunity to tar President Barack Obama in any way possible. So, even if the average GOP voter doesn’t quite grasp the scandal in the same way their betters inside the Beltway do, they are happy to jump on the bandwagon.

At this point, Milbank confessed that he thinks Attorney General Eric Holder and his DOJ have gone too far in their targeting of journalists – an opinion he has made clear in several columns in the Washington Post.

…Heavy sigh. Where to begin.

There is an infinitesimal kernel of truth to this charge. Members of Congress, including Republicans, vexed by number of leaks relating to national security which were inexplicably flowing to reporters at the New York Times – leaks relating to the administration’s deliberation on a timeline for the drawdown of troops in Afghanistan or the shooting at Ft. Hood – did demand the administration crack down on leakers (not journalists). Among those perturbed Republicans was Secretary of Defense Robert Gates, in fact.

We know about this because of a sympathetic article in The Daily Beast in which unnamed aides close to Holder were quoted extensively on how Holder felt “remorse” upon learning of the scale of his Department’s malfeasance via an article in the Washington Post on Memorial Day. That article, apart from detailing Holder’s lamentations, also revealed that Congress was to blame for his department’s zealous pursuit of leakers and journalists alike.

On December 3, 2009—just a few months before he approved the affidavit in the Fox case—Holder, FBI director Robert Mueller, and director of national intelligence Dennis Blair were hauled before a secret session of the Senate Intelligence Committee to explain why they weren’t punishing more leakers. For its part, the White House never discouraged aggressive probes to find and punish leakers.

The Daily Beast’s Daniel Klaidman notes that this detail was provided “As an explanation, if not a justification.” Good to know. Of course, the warrants targeting the New York Times for their publication of stores that framed the administration in a positive light have yet to surface. Don’t worry, though. MSNBC host Chris Hayes is certain they will show up eventually.

Milbank knows all this. He surely also knows that House Committees which demanded the DOJ crack down on leakers were not chaired by Republicans in 2009, when Democrats still controlled the House.

But this bit of context was too muddying to include in an autopilot Friday afternoon segment on Bashir’s program. This oversimplification bordering on falsification, served up amid a jolly chastising of average GOP voters for their unsophisticated mistrust of the press, would embarrass most opinion journalists.

Certainly, the credulity with which Milbank seems to greet these selective leaks designed to improve the image of the Justice Department appear out of place, given his many posts excoriating the DOJ’s behavior. But Milbank doesn’t buy this spin. He’s merely putting on a show for an audience he doesn’t think enough of to provide them with a nuanced, contextualized version of events.

This episode says quite a lot more about Bashir’s show than it does Milbank.