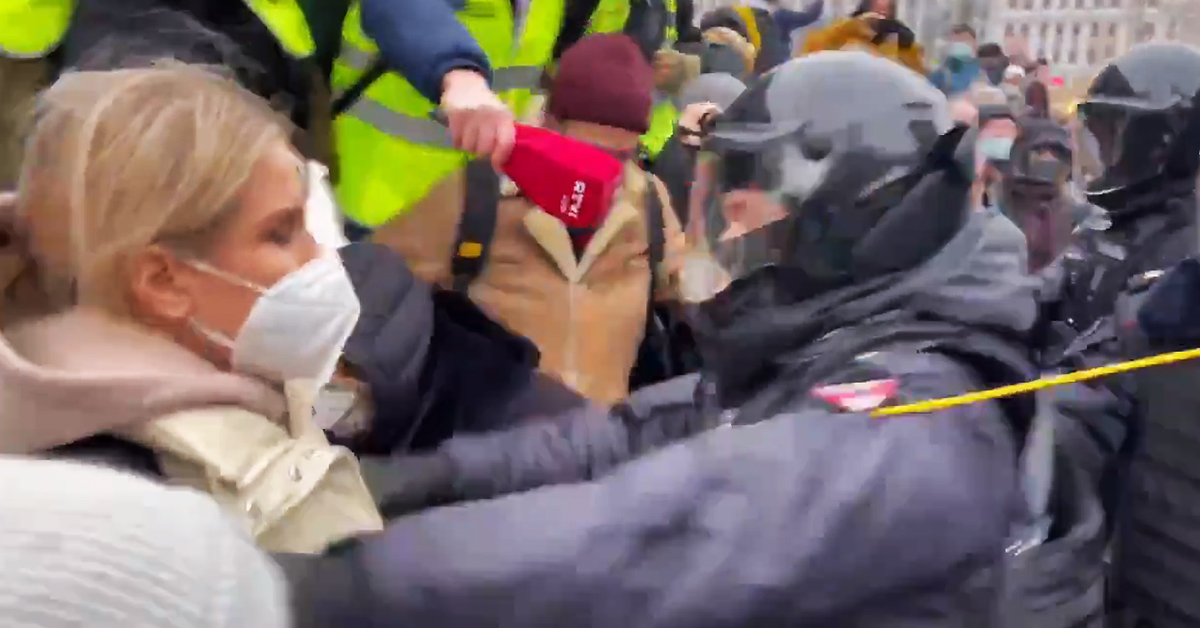 Leader of Russian opposition to Vladimir Putin and outspoken Kremlin critic Alexey Navalny, who was poisoned in a failed assassination attempt, was dramatically taken into custody immediately upon his return to Moscow a week ago.

On Saturday, in even more dramatic footage, Navalny’s attorney Lyubov Sobol was seized and dragged off by riot cops in the midst of massive protests.

Sobol was in the middle of being interviewed when riot police forced their way through the crowd, violently shoving the reporter aside, then grabbed Sobol and dragged her away as she let out a shout of distress.

Video of the moment when Navalny ally/lawyer Lyubov Sobol is grabbed by riot cops while speaking in Moscow. (Video by @tvrain) pic.twitter.com/dCY0nlLzgi

Over 2,100 protesters have been arrested in demonstrations demanding the release of Navalny. Video and photos of the protests and arrests have circulated on social media, despite the Kremlin.

“A column of people in purple scarves and hats is walking towards Pushkin Square, the police let them through”

“People have ceased to be afraid, do not give their own. And the cops vydno that morally drooped. Putin is a thief!!!! Freedom for the Beginner !!”

Hundreds of videos like this coming out of Russia today. Putin has spent 20 years building up the security forces and looting the country while Russia stagnates. They come out to support Navalny and their own future. https://t.co/kvuRjHQutq

The Russian people are furious at the corruption Navalny exposes. But as long as the West is happy to do business with Putin and his mafia, they can turn the country into a prison while still enjoying the rich life.

Tens of thousands of people have joined protests across Russia, demanding the release of Kremlin critic Alexey Navalny who was jailed last week after he returned to the country for the first time since recovering from a poisoning with a nerve agent. https://t.co/fpPSEQYs2X pic.twitter.com/YVyT7b7DT7

More than 1,500 people were detained in nationwide protests in Russia as tens of thousands of people took the streets in support of Kremlin-critic Alexey Navalny pic.twitter.com/tAYpTUlPvp

There are many hundreds of other examples as the unrest continues late into the night in Moscow and even at Russia embassies abroad.