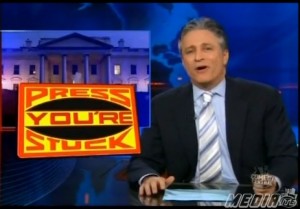 On last night’s Daily Show, host Jon Stewart (or as I like to call him, “Respectable #37“) eviscerated the White House Press Corps over what he calls “jockeying” for Helen Thomas‘ front row seat, the Biden BBQ Brouhaha, and the quality of their questions. While the bit was hilarious (I especially loved the reference to whammy-rific game show “Press Your Luck“), I would like to point out a few things.

The bristling here actually occurred in two stages: the press corps was bristling in advance, yesterday, at the “controversy” over the Biden Beach Bash, and as a member of the White House Press Corps, allow me to further bristle on these pages.

Let me first bristle at the notion that, on the occasion of the sad end to a longtime colleague’s career, we’re all ignoring the larger questions in  favor of a slap-fight over her seat. Stewart expertly nails the deeper questions that the Helen Thomas story points up, and these are exactly the questions that are being chewed over in the Brady Briefing Room. With few exceptions, though, White House correspondents are reporters, not commentators, so those discussions remain in the briefing room.

Speculation over who would get Helen’s seat began moments after her retirement, but not by members of the press corps. This is evident in Stewart’s clip package, as well, but he gives the impression that Helen’s colleagues are sizing up her career’s gravesite for a new condo. That’s not what’s happening.

To the extent that there is any jockeying to be done, it won’t be done by White House reporters, but rather, the heads of their various news outlets. Among the press corps, the question has been thrust upon us, but to us, it is a tertiary issue. First of all, many have already made Stewart’s observation that there is no practical difference between the 2nd and front rows. Far more coveted is the bump from 4th row oblivion to the more question-friendly 3rd row.

Primarily, the seat is regarded with some reverence. When a photographer took a shot of Helen’s empty seat yesterday, most of the assembled reporters let out a wistful gasp, and more than one reporter remarked on the historic import of Helen’s perch. We are not a cadre of ghouls rifling through Helen’s pockets.

The Biden controversy was another topic of discussion around the briefing room yesterday. The prevailing attitude was to laugh it off as the overblown fretting of outsiders who don’t understand the value of off-the-record interaction, and who overestimate the soul-purchasing clout of a charbroiled cheeseburger. Those critics fail to recognize the value that reporters can deliver to their constituents, the American people, as a result of this kind of access. Off the record talk is referred to as “for guidance,” wherein a source will push something that he or she doesn’t want people to know is being pushed. But a good reporter can glean valuable insight into the source’s motivation, and has no obligation to be pushed.

I also pointed out Michael Triplett‘s observation that not all of those critics have clean hands:

Matthew Yglesias chimed in that reporters can get “captured by their sources” while officials become “unduly concerned about the press coverage they get.” Maybe Yglesias’ bosses at Obama’s favorite think tank and farm team for the administration–the Center for American Progress–can mention that next time they are invited to a State Dinner.

Finally, my chief complaint with Stewart’s roundup of silly-sounding questions is that I wasn’t included. I mean, come on, Stewart, I once asked Gibbs about the television show V, for f**k’s sake!

Seriously, though, that package misses the point on several counts. First of all, those questions are a minuscule portion of what gets asked, but more importantly, they have value. People are interested in this stuff, and as the 50th most important question at any given briefing, we don’t inflate their importance. If Jon Stewart wants to protest the effect of the profit motive on journalism, I expect we’d all be there with him.

Some of them are extremely newsworthy, as well. Jake Tapper‘s question on Michael Jackson, for example, was one of many questions that were asked on the subject that day, because Michael Jackson’s death was a huge story. The larger line of questioning, by Tapper and others, was why the President had not issued a written statement about the pop icon’s death. It’s a good question, because some deaths get written statements, while others don’t.

Still, as a humorist, Jon Stewart gets to manipulate footage to make a point, he has no duty to make his comedy bits double as comprehensive treatises on journalism. His larger point, that today’s news coverage is often superficial and inane, is a valid one. I would just argue that it’s not the fault of the White House press corps, but of news editors and producers, who ignore the substantive work we do in favor of fluff and meme-building.