Whoops! Did Eric Bolling Drop An F-Bomb In Heated The Five Argument? 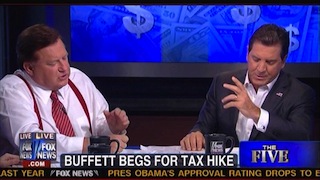 Was there another f-word on The Five today? If so, it wouldn’t be terribly surprising. When you’ve got a live show where the debates sometimes get contentious, this stuff happens. No, we’re just amused it wasn’t Bob Beckel this time. In fact, just a couple minutes after Beckel made a joke about not being able to say a word he wanted, it was Eric Bolling who let one slip.

The alleged curse happened during a discussion of Warren Buffett’s New York Times op-ed. As Beckel was pointing out that richest Americans have paid the lowest taxes in years, Bolling made an exclamation that certainly sounded to us like “It’s the same f*cking point, Bob!”

Judging by the hilarious reactions from Kimberly Guilfoyle and Greg Gutfeld, we clearly weren’t the only ones to hear it.

Update 2: Bolling tells Mediaite that he said “talking point,” and not “f*cking point.”

What do you think? Have at it in the comments! It’s certainly more fun than debating the actual economy.