Why Doesn’t Joy Reid Have a Weekday Evening Show on MSNBC?
Opinion

Why Doesn’t Joy Reid Have a Weekday Evening Show on MSNBC? 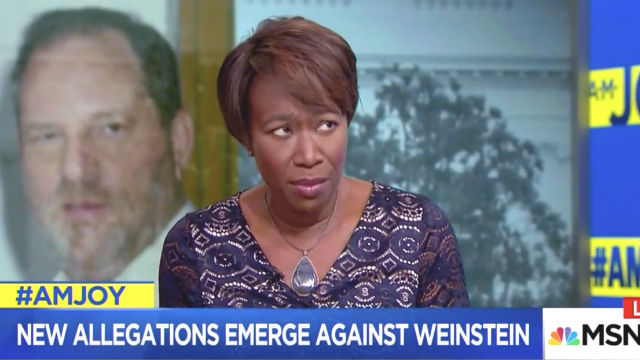 It is really easy to ask why this or that person doesn’t have his or her own prime time cable show. But Joy Reid is different. She is different in what she covers, how she covers it and different in that she is a proven entity in the world of cable news. She is also a total bad-ass.

In the event that you don’t tune into weekend mornings on MSNBC, or miss her occasional turns as interim host to cover for a vacationing host, Ms. Reid has become one of the top cable news hosts in the business. Day in and day out she consistently brings fire and passion to her weekend AM with Joy Reid show, and seems to intrinsically understand what cable news viewers value most: a strong and consistent point of view that shows savvy understanding of complicated political issues, and the willingness to speak truth to power. Directly.

A cursory look at recent Mediaite posts illustrate why she’s so good.

She’s fearless, best exemplified by her going off on the apparent hypocrisy of her competitors at Fox News, namely Tucker Carlson and Sean Hannity, in light of their Harvey Weinstein obsession, yet ignoring the Roger Ailes, Bill O’Reilly and Eric Bolling sexual harassment allegations/debacles. She doesn’t bite her tongue — especially in speaking truth to power — like when she called out President Donald Trump for what she sees as a pattern of his “particular reflex to attack women, to attack women of color.” Whether you agree with her or not, she effortlessly elicits out newsworthy comments and/or meaningful discussions from her guests.

Reid wasn’t always this good. In her earlier days she seemed far less relaxed in a hosting role but she has honed her skills, served her time and proven her value.

Critics may see Ms. Reid as partisan hack, and the roughly 35% of the country who still support President Trump might use even harsher language. But she is on MSNBC and is no less a politicized than her ideological foes who appear on Fox News. Like the best of her counterparts at Fox, she understands what makes for great television: solid bookings, passionate interviews and outrage, solid research and sometimes, yes, simplified positions on the political news of the day.

Given that the Executive branch and Congress are currently controlled by the Republican party, there is no shortage of political fodder for Ms. Reid to mine for compelling content. And yes, she is benefitting from the very oppositional perspective that allowed Fox to thrive during the Obama administration. And MSNBC has enjoyed the fruits of Reid’s labor with impressive ratings. Year to-date, the total viewer average of AM Joy‘s Saturday and Sunday edition is tracking to be the best year ever for the network in the 10a-12p time period. Additionally, year to-date, the Saturday edition of AM Joy is averaging more than 1 million total viewers, beating CNN for the first time ever in MSNBC’s 21-year history.

Putting aside strong ratings for a moment, did I mention that she is also a woman of color? Did I also forget to mention that MSNBC has no people of color, at all, hosting its evening programs? Oh and I think I also failed to point out that Reid finds terrific guests of every color and creed.

But that isn’t the point and it’s certainly not the reason she deserves a prime hour. It’s just a reality.

MSNBC has enjoyed a rise in ratings across the board since the Trump administration, and has maintained a consistent primetime lineup for the past few years. One change that did come was the brief stint that Greta Van Susteren had hosting the 6pm hour after overplaying her hand at Fox News and joining MSNBC at the beginning of the year. Greta’s MSNBC experiment did not earn great ratings or reviews and her program was mercifully cancelled at the end of June.

So they had a spot for another liberal who would fit with the rest of their prime programs. A great (female) host named Joy Reid, who was bounced around between various daytime hours, could have been chosen to replace Greta. Instead they picked MSNBC’s Chief Legal Reporter Ari Melber.

Melber, is a well-regarded analyst and his show has proven to be smart, though judging purely by the scarcity of Mediaite posts, it’s also a little too safe. In his 3 months on the air it has proven to be neither particularly interesting nor newsworthy. While Reid sounds like she is speaking from the heart, Melber sometimes has an odd vocal affect, sounding a wee bit like Gilligan’s Island “Millionaire” Thurston Howell III. The ratings tell a similar story — not bad but he almost always comes in a distant third behind Fox and CNN.

I am not saying they should can Melber’s show. He has proven to be a valuable and smart asset in MSNBC’s stable of hosts, analysts and reporters and I will bet the show will continue to improve. But they they are missing an opportunity to find a bigger platform to feature Reid. She has become something special and it’s time, for MSNBC’s sake, that they come to recognize that reality.