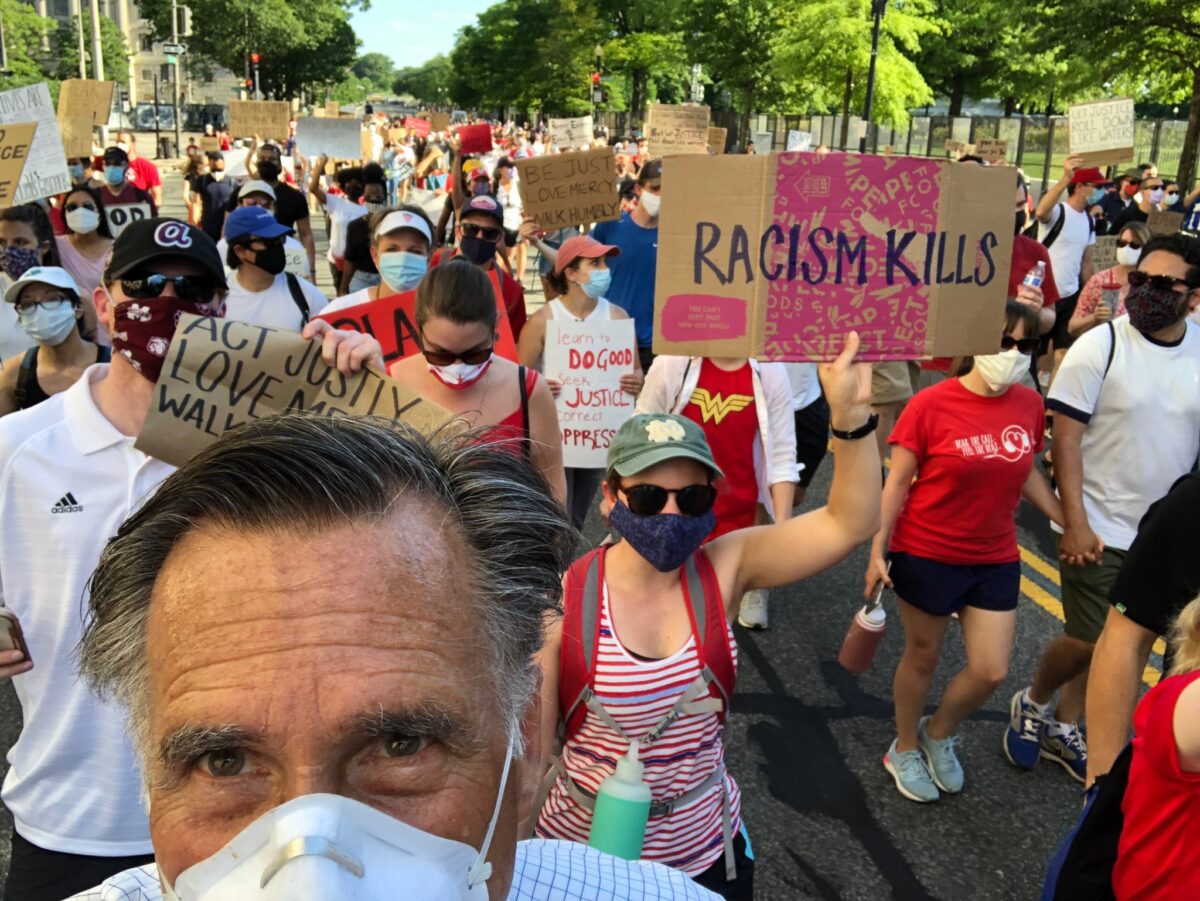 Sen. Mitt Romney (R-UT) joined the protests in Washington, D.C. on Sunday, telling reporters that he was doing so “to make sure that people understand that Black Lives Matter.”

Romney appears to be the first Republican Senator to join the protests, which were sparked by the killing of George Floyd by Minneapolis police officers and have now continued into their third week.

Romney joined a group of protesters who were organized by local pastors as part of a faith-based demonstration announced for this Sunday. Reporters on the scene described the group as growing to more than 1,000 people who peacefully carried signs (many with Biblical references on them), chanted “Black Lives Matter” and “Do Justice,” and sang songs, including “This Little Light of Mine,” a classic American hymn that was adopted — and adapted — by civil rights protesters in the 1950s and 1960s.

The song wasn’t the only connection back to the Civil Rights Era. The organizers of today’s march deliberately intended to evoke the spirit of the 1965 Selma-to-Montgomery marches.

Just the day before, Romney himself had tweeted a photo of his father, former Gov. George Romney (R-MI), who had joined the civil rights marches in Detroit in the late 1960s.

This is my father, George Romney, participating in a Civil Rights march in the Detroit suburbs during the late 1960s—“Force alone will not eliminate riots,” he said. “We must eliminate the problems from which they stem.” pic.twitter.com/SzrcAyfPD8

Romney’s tweet mentioning his father was highlighted for praise by Nikole Hannah-Jones, New York Times Magazine reporter and contributor to the Times‘ 1619 Project.

George Romney was an amazing man. I went through his archives at U of Michigan and saw the vile and racist letters white constituents sent him calling in him to violently suppress protests. His responses were to tell white voters *they* contributed to the riots. https://t.co/lIeFVTlZsx

The Utah Senator spoke briefly to Washington Post reporter Hannah Natanson, who was covering the protest, telling her that he had joined the protest because he sought “a way to end violence and brutality, and to make sure that people understand that black lives matter.”

.@MittRomney is marching with a group of nearly 1,000 Christians to the White House. Here he is on video saying why he’s walking: “… to make sure that people understand that Black Lives Matter” https://t.co/KCxJNchCMs pic.twitter.com/Za0Am2WL8g

He had similar comments for NBC’s Haley Talbot: “We need a voice against racism, we need many voices against racism and against brutality. And we need to stand up and say black lives matter.”

.@SenatorRomney marching in front of the WH: “We need a voice against racism, we need many voices against racism and against brutality. And we need to stand up and say black lives matter.” (w/ @alivitali) pic.twitter.com/rGrXvM6wty

Romney’s participation does raise questions about whether it will further drive a wedge between him and other members of his party, specifically President Donald Trump, who has clashed with Democratic elected officials, like D.C. Mayor Muriel Bowser, over the protests and what should be the proper response to them. Earlier this year, Romney took a lot of heat from Trump and other members of his party for being the sole Republican vote to remove the president from office during the impeachment hearings.

The gap between Romney and his party (at least at the national level) continues to grow. https://t.co/j84jRKGZBl

It’s *very* brave to break ranks with your political party — especially if there are vindictive people within. @MittRomney has certainly surprised me. #blacklivesmatter #GeorgeFloydProtests https://t.co/KU7WDMSG47

For now, as noted above, Romney appears to be the lone Congressional Republican joining these protests, and seems very comfortable in his decision. His long-held conservative beliefs make him unlikely to join the Democratic Party, but he did receive some cheers from the left side of the aisle, including Rep. Ted Lieu (D-CA).

This is an issue where elected Republicans seem to be lagging behind their voters. FiveThirtyEight reported on several recent polls about the protests and how the Trump administration was handling them, and while Trump usually enjoys high approval ratings from Republicans on many issues, this was one where his ratings took a hit:

UPDATE: This article originally stated that Romney appeared to be the only Congressional Republican who had joined the protests. Rep. Will Hurd, a Republican representing a Texas district that stretches from San Antonio to El Paso, recently joined a protest in Houston. Hurd announced last year that he had decided to not run for re-election and will retire from Congress in January at the end of only his third term.

I’m in Houston marching in solidarity with George Floyd’s family. We are showing you can be outraged by a black man getting murdered in police custody, thankful for our First Amendment rights and angered that people are looting and rioting, which goes against our American values. pic.twitter.com/1ZLv4Ebupn