Winners and Losers of the Democratic Primary Debate 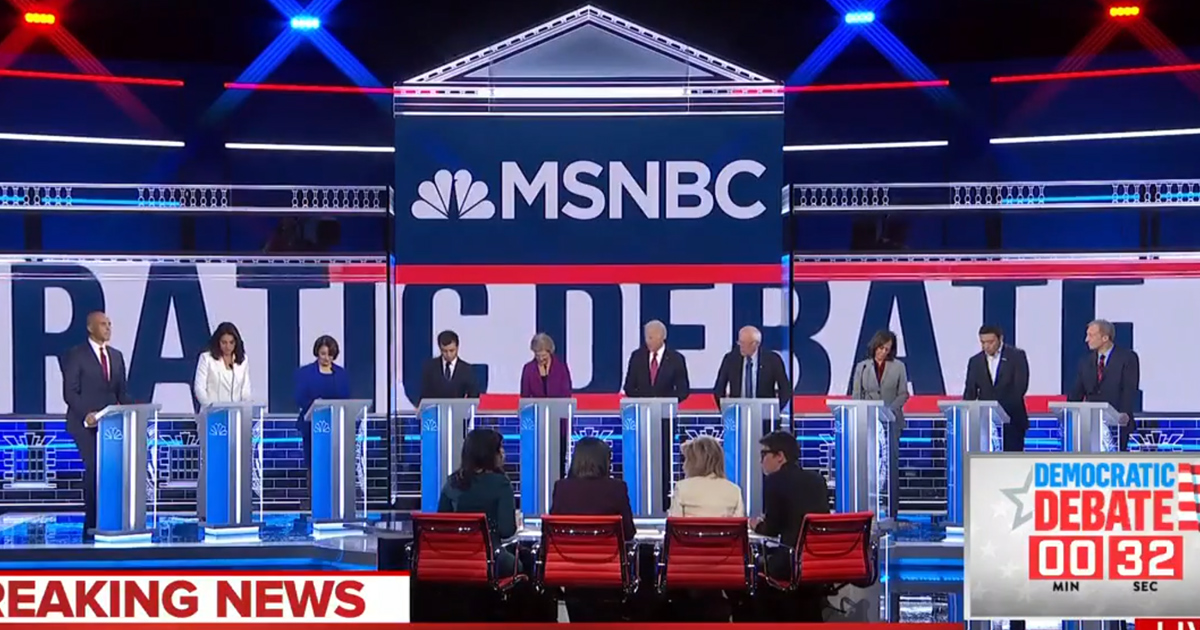 For two (plus) hours on Wednesday, the top candidates for the Democratic nomination for President of the United States took the stage for a debate on the issues. Hosted by MSNBC/NBC News and The Washington Post, the debate featured just ten candidates, down from a huge slate earlier this year, and was moderated by a panel of four.

As with any debate, both moderator and candidate were presented with opportunities to shine or to falter, and most did some of both. But in the end, from a political standpoint, someone will have done the most to help their campaign, and someone will have either done the least to help theirs or the most to hurt it. Which is what Mediaite is here to sort out. So let’s do this.

The network, and the moderators, delivered a well managed debate, and among the various instances of such programming over the election years, this was definitely one of the smoothest, with the moderators (Rachel Maddow, Andrea Mitchell, Ashley Parker, and Kristen Welker) keeping a good pace and getting the candidates onto the selected topics, and keeping them there. It was by far the smoothest debate in the half-dozen held so far this year.

Senator Cory Booker did himself the most favors on the stage on Wednesday. In addition to his relaxed delivery, he had more than one TV ready moment, including probably the snappiest line of the night when he suggested that Joe Biden, (who did not have a great night) may have been high when saying he wasn’t sure marijuana should be legalized. In fact, Booker’s total domination of Biden will likely be the stand-out moment of the evening, and the one clip that gets talked about and shared the most going forward. As Booker himself noted tonight, he has yet to qualify for the next debate, and needs an energized base to get him there. He will probably get that boost from this showing, and that’s the clearest way to win in any primary debate.

The Other Winners: Amy Klobuchar had a good night, but for the runner-up, you have to go with Pete Buttigieg, who argued against typecasting as the guy who doesn’t belong by pulling some zingers, memorable lines, and a much stronger than expected delivery.

Whoever wrote the question for the candidates about “lock him up” chants didn’t do the format or the moderators any justice. The overall presentation was a win, but that question was a definite loser.

THE BIGGEST LOSER:
Joe Biden tanked it. It is tempting to take the front-runner’s performance as neither a win nor loss, and in polling that may bear out. But as a political performance his was past sub-prime. His first answer to a moderator’s question, to be blunt, was gibberish. In addition to the normal instances of jumbling over words or getting off track, his answer on the topic of violence against women was practically disastrous. To put it simply, don’t say “keep punching at” domestic violence, going forward, sir.

The Other Losers: Tom Steyer basically couldn’t pull a win. Even if he beat his own expectations, he simply doesn’t match the field in purpose and practice, though he did (per his entire campaign’s intent) bring the strongest focus to his own issue of climate. However, the real runner-up loser was Kamala Harris, who tangled with the (also less than stellar) Tulsi Gabbard to much less gain than she probably thought. Harris has floated from the front to the back of the pack throughout the primary, and really needed to come out of this debate as a leader among the candidates. Instead, she did a lot of treading water and didn’t capture the moment for the electorate.

Sen. Elizabeth Warren was our split decision, who won on some of her rhetoric and talking points. She did better than Bernie Sanders on some of Bernie Sanders’ issues, but worse than Pete Buttigieg and Cory Booker on some of her own. Early in the debate, she tried to go after Booker when he argued that in black churches and in neighborhoods he visits, Americans still seek the entrepreneurial American dream. Warren raised her hand and pitched, for the second time in minutes, the benefits of tax hikes. As an attack, it was a flop, and she handed Booker his first winning moment of the night on a silver platter.

One unequivocal win for Warren: her ubiquity on the stage. The senator spent the most time talking, with more than 13 minutes. Buttigieg was the runner up, and last place was Andrew Yang.