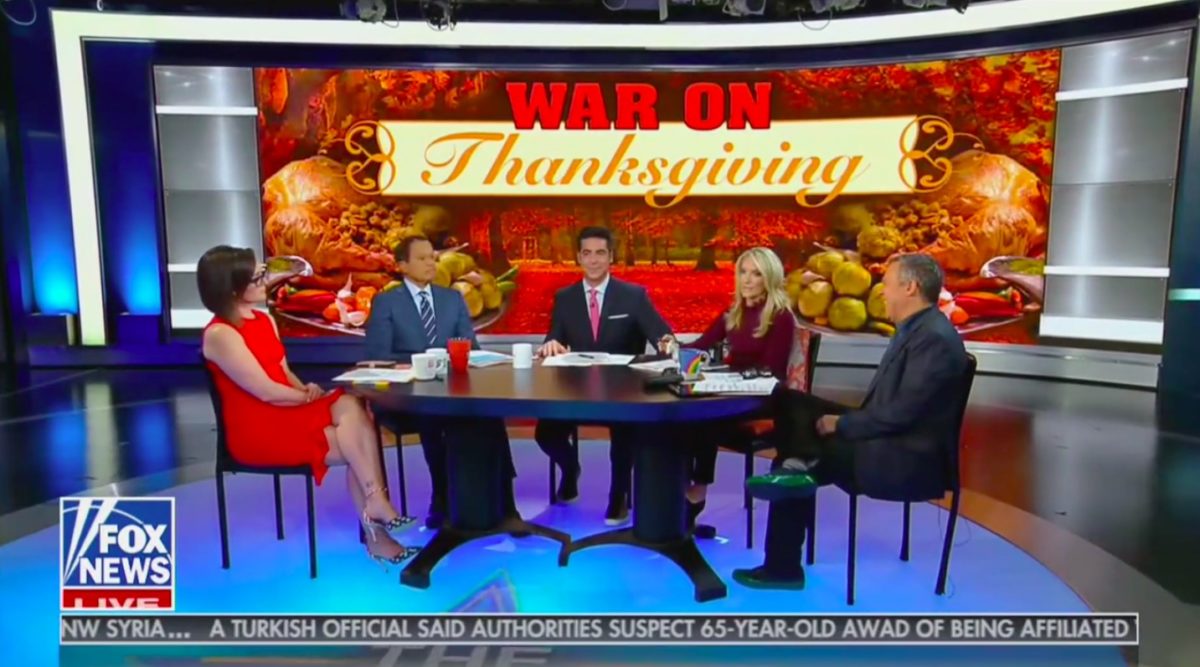 As Americans prepare to enjoy Thanksgiving, a war was brewing on Twitter following President Donald Trump’s warning that unnamed, nefarious forces are seeking to destroy the holiday.

Trump held a rally in Florida on Tuesday night where he offered the strange claim that people “want to change the name of Thanksgiving.” Mediaite posited that Trump’s claim was planted in his head by Fox New’s coverage on a HuffPost article about how to have an environmentally friendly Thanksgiving. Fox & Friends covered Trump’s remarks the next day in a completion of the feedback loop.

Since Trump and his favorite media outlet are entertaining the idea that liberals are trying to destroy the holiday, #WarOnThanksgiving emerged as a trending topic on Twitter, with users mocking the concept with sarcastic reports on how the war’s shaping up.

I hope this letter finds you well. Vegans are bombarding us with Tofurkey and we’re down to cranberries still shaped like the can.

My dearest Mother,
I write from Cranberry Ridge, over the river and through the woods on Grandmother Mtn.
The soldiers are weary, but their righteous fight – despite the shortage of gravy – is a just one and they will prevail over the liberals’ #WarOnThanksgiving.
Your son,
Todd

The true #WarOnThanksgiving is people putting up Christmas decorations weeks before Thanksgiving. Put some respect on the tastiest holiday of the year.

I accidentally said “Happy Thanksgiving” in public and I was immediately seized by a gang of radical liberals. They waterboarded me with kombucha and repeatedly threatened to give me healthcare. I’m lucky to be alive. Stay safe out there, #MAGA. The #WarOnThanksgiving is real.

Before I join the #WarOnThanksgiving, what’s basic training like? I don’t do well with early mornings or being yelled at. Will there be wifi? Are the turkeys armed? Will stuffing be provided or do I bring my own? Wait, this is an awful idea. Worst last-ditch made-up crisis ever. pic.twitter.com/7V5QjezlER

#WarOnThanksgiving It was only a matter of time before they fought back pic.twitter.com/CrKHH1aVlD

Ths sh*t just got real. Opposition troops are making their way toward residential areas. Protect your family and your pets! #WarOnThanksgiving pic.twitter.com/WHeRBa70Pe

Burn this mother fucker down. pic.twitter.com/pfEHEae9mt

I won the battle of Turkey Leg, but the mood turned sour once the biscuits ran low. Aunt Mabel wants to call it “Turkey Day,” while most of us are fine calling it “Thanksgiving.” Send PIE.

If you don’t hear from me, I’m in a food coma. #WarOnThanksgiving

When you see there’s people who think there’s a #WarOnThanksgiving pic.twitter.com/Yx6JH9a136

My dearest, As I write, huddled in camp, we have only a pumpkin spice candle by which to warm ourselves. Outside, the battlefield runs red with cranberry sauce. In town, the enemy is staging a spectacle of their military might…#WarOnThanksgiving pic.twitter.com/DLzSmFwEaF

Viceroy Gobble’s gravy boats have taken the docks. My men and I have retreated to the cranberry bogs, where we are over-oiling the fryers now, for our last stand.

Tell the children our revenge must be served at a minimum of 165 degrees.

Dearest Ellen, they come at us again and again, screaming that stuffing is not dressing, lobbing cans of jellied cranberries at our heads. I’m not sure how long we can hold the line. Pray for us. #WarOnThanksgiving

Looks like some folks in politics are watching just a little too much South Park #WarOnThanksgiving pic.twitter.com/fuw7mq7UvE