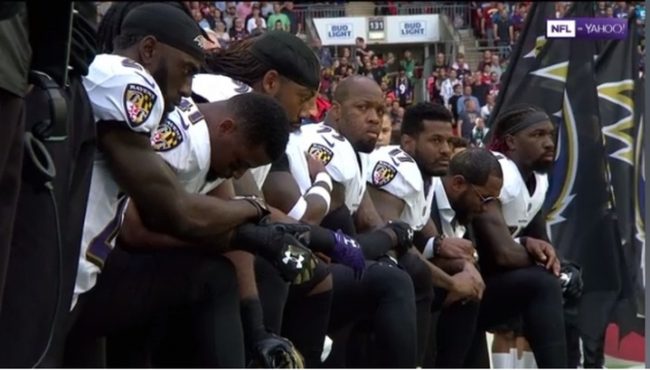 The latest uncomfortable chapter of the American culture war is the debate over NFL players (and in some cases owners and coaches) who are taking a knee while the National Anthem as played. In the event that you’re just awaking from a coma — and wisely checking in on Mediaite.com to see what you’ve missed — here’s a quick recap of the past few days.

During a campaign rally in support of Alabama GOP Senate candidate Luther Strange, President Donald Trump called out the “sons of bitches” who are not standing for the national anthem, said that they should be fired, and set off a firestorm of controversy, which united nearly the entirety of the NFL (and much of the professional sports world) against his rhetoric.

Cut to last Sunday when more eyes than usual were focused on Sunday’s NFL slate — and pre-game shows boasted record ratings for recent years — while the country debated the merits of this protest. Trump doubled down on his dismay for what he sees as disrespecting American icons like the flag and the U.S. military, while the left took the bait and tried to pivot the discussion to one about free speech.

But here’s a helpful reminder: the NFL protests aren’t about disrespecting the flag or the military. They are about bringing attention to what many see as systemic mistreatment that some in the police force show to African-Americans.

This is not about free speech, nor the power of private companies to control the behavior of their employees (though those are fascinating questions that this controversy begs.) Instead, Colin Kaepernick — and the hundreds of players who have followed suit — offered peaceful and silent protest to bring attention to an issue that they feel is being overlooked in a dire situation.

In fact, the idea to kneel for the national anthem came about as a suggestion of U.S. Veterans who told Kaepernick that it was a more respectful way of expressing protest. Read the following tweetstorm from Dr. Theodore Johnson, an adjunct professor of Race and Politics at Georgetown University, who provided a reminder of how this entire conflict initially came about:

1/ Lost in the debate over NFL players’ kneeling is how Kaepernick came to kneel during the national anthem instead of sitting.

2/ When Kaepernick first started to draw attention to the oppression of black people, he was sitting on the bench in protest. pic.twitter.com/Ul5FltrTn4

3/ He then met w/ a couple of veterans who discussed his sitting. They advised him if he wanted to protest but show respect, he should kneel

4/Kneeling is a sign of respect. We kneel when we pray. Military members kneel when presenting the flag to military families during funerals

5/ The vets told Kaep that kneeling would show respect for those who fought & died for the country, while also drawing attn to his protest

6/ So kneeling was SPECIFICALLY SELECTED as the form of protest to HONOR those who fought for our country https://t.co/cskL63hX8d

7/ Again, Kaep listened TO VETERANS on this issue and chose to kneel instead of sitting. pic.twitter.com/QROYU9uYd7

8/ Yet, now his kneeling is seen as “disrespectful.” And folks ask: “isn’t there a better way??” The truth is…no… there isn’t.

9/ When black students sat at whites-only lunch counters desiring to buy a meal, they were beaten and spat on. “Isn’t there a better way?”

Johnson continued in his tweets to remind his followers that protests are only really effective if they beg uncomfortable questions or cause inconveniences in the status quo — which in this case is what many see as the death of too many young and unarmed black men who are only guilty of, well, being young black men.

The problem with the current culture war debate is that, just like the choice vs life debate, you have two intractable sides of the argument talking past one another with no reasonable resolution in sight.

In this instance, the anti-protestors see kneeling as the ultimate disrespectful act of petulant and entitled millionaires. This ignores the fact that Mr. Kaepernick has apparently given up his career as a pro football player because of a cause he so fervently believes in. (His raising of nearly $1m dollars for oppressed communities support this defense.)

On the other side, President Trump has successfully turned this cause into an issue of patriotism, especially with his (winnowing?) base of supporters. This is a base of supporters, by the way, that is far more interested in Blue Lives Matter than Black Lives Matter, and generally sees police brutality in a very different light than the people of color who are trying to raise awareness about it.

Trump has reportedly admitted that this fight against the NFL has worked out well for him, and in many ways he is right. He has successfully pivoted the debate to one about patriotism, and the media has ostensibly helped him by amplifying that debate (and to a lesser extent free speech.)

I’d be willing to bet that most (if not all) of these protestors do not hate America, the flag nor the military, as their detractors suggest. But they are trying to bring attention to perceived injustices, supported by factual evidence.

The media has become an willing enabler of Trump’s pivot on this issue, which neither serves our country, nor the protestors, fairly.  It’s time to put free speech and chauvinistic nationalism aside for a moment and return to the issue protestors are aiming to bring to light: police brutality, not hatred of the flag.