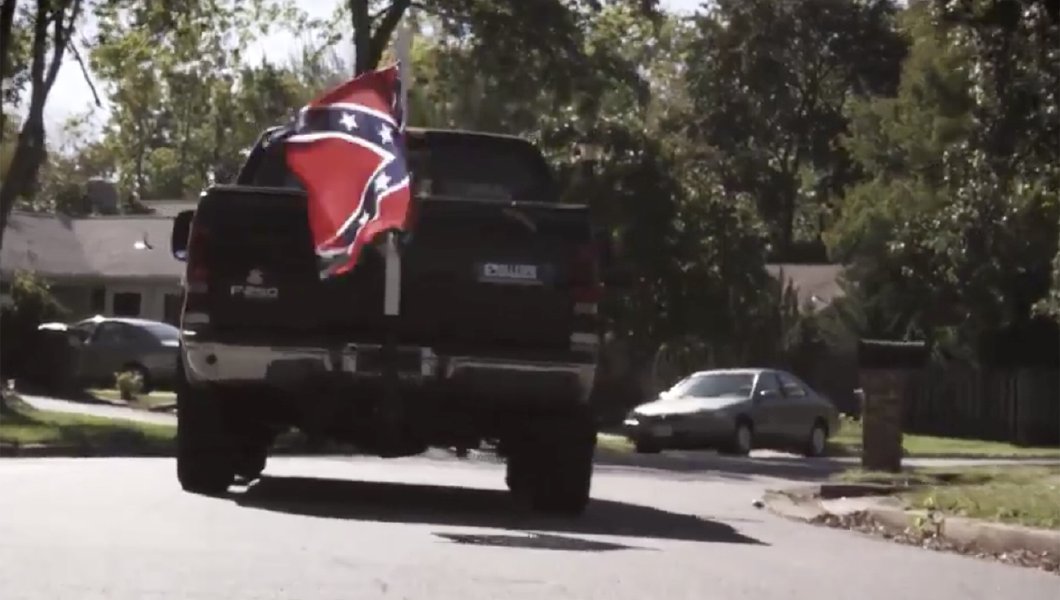 It may be the most despicable campaign ad in decades and the Democrat who it is designed to help refuses to denounce it. In fact, Lt. Governor Ralph Northam‘s Virginia Gubernatorial campaign has embraced it.

Here’s a look at the ad depicting a white man driving a pick-up truck with a Confederate battle flag flying on its rear bumper. Minority children, including a young girl wearing a hijab, run for their lives in a peaceful neighborhood as the truck speeds through the streets trying to mow them down. The truck is adorned with a Gadsden Flag (Don’t Tread on Me) license plate and an Ed Gillespie bumper sticker. Gillespie is the Republican nominee for Governor and Northam’s opponent.

Ed Gillespie and Donald Trump promise the American dream, but can only deliver an American nightmare. No more. Vote @RalphNortham. #GameOnVA pic.twitter.com/mwpWXM47HZ

The ad was released Monday by Latino Victory Fund is being compared to the infamous NAACP ad against George W. Bush in 2000 connecting the Republican to the lynching of James Byrd, an African-American man who was brutally murdered and dragged behind a pick-up truck in Texas.

Although the ad did not originate and was not authorized by the Northam campaign, Republicans have called on the Democrat to denounce the one minute spot. Instead, his campaign rationalized the blatant fear-mongering.

“Independent groups are denouncing Ed Gillespie because he has run the most divisive, fear mongering campaign in modern history,” Northam Spokesperson Ofirah Yheskel told The Washington Post. “It is not shocking that communities of color are scared of what his Trump-like policy positions mean for them.”

Polls for next week’s election have been all over the map with one last week showing Gillespie up by eight points and one this week showing Northam up seventeen.

The emergence of this ad, clearly designed to prey on the worst instincts and emotions of voters on both sides of the political spectrum, caused Real Clear Politic’s resident poll watcher Tom Bevan to theorize the Northam camp may be in trouble:

This ad is so desperate it makes me think Gillespie is going to win. https://t.co/krwdybCcsd

Indeed, the Twitter reaction from many pundits rightly called the Northam camp and their supporters out for the race-baiting bigotry depicted in the ad and most of them suggesting this will backfire and actually help Gillespie in the final stretch of the campaign:

Less than two weeks ago Obama was campaigning for Northam in the name of "rejecting the politics of fear." Now Northam allies run this ad: https://t.co/2ZEQ6dre1i

This despicable ad will do more to motivate Republicans to vote than it will to help Northam. https://t.co/6ARGD6Y4Zi

The most vile political ad I’ve ever seen. Northam deserves to be stomped in this election. Show this to everyone. https://t.co/h3vjr6Bp7B

In their endorsement of @RalphNortham the @washingtonpost said he ran a campaign of "decency and good sense" Fact check? https://t.co/btwB2u5IwY

Virginia’s off-year election schedule puts their governor’s race one year after every presidential election. This always sets up the “purple state” election as a bellwether for the administration that just won the White House. Northam’s strategy is clear. Link any Republican running (even relatively moderate Gillespie) as a racist, hate-mongering Trumpster who must be stopped. With election day just one week away, the rhetoric and mud-slinging is sure to get more extreme and dirty.

And if the “Paint every Republican as racist” strategy works, be sure to see it repeated across the nation in next year’s mid-term elections.