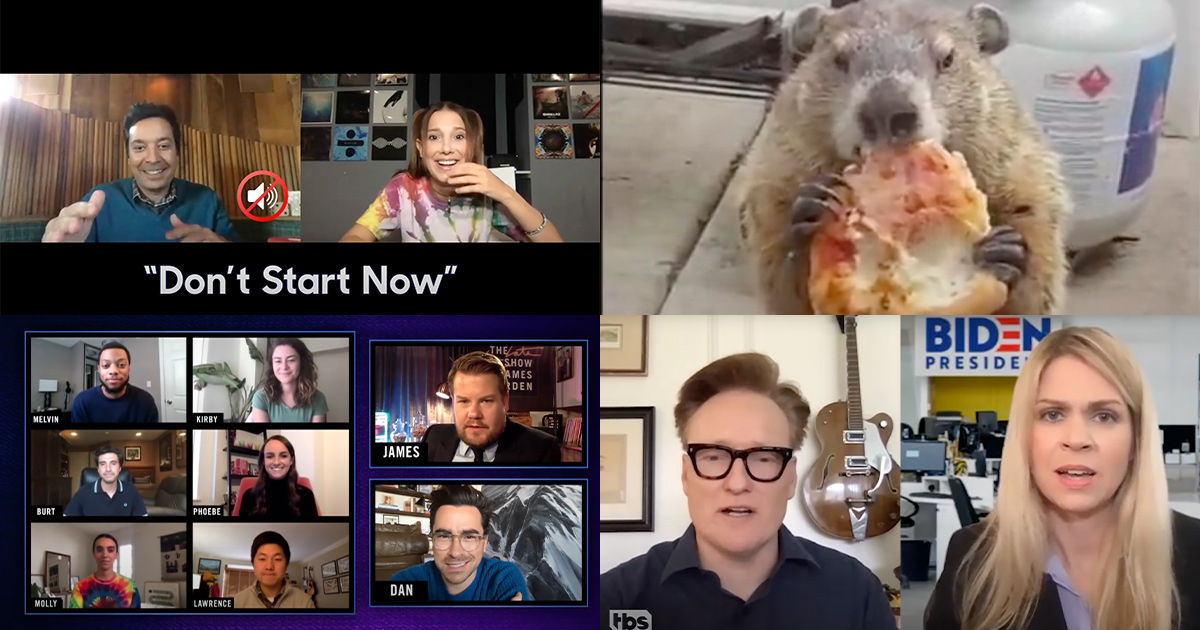 This is week five of all of late night stopping normal production during the coronavirus pandemic. But hosts have continued doing shows from home and brought in plenty of special guests to entertain viewers. We’ve put together some of this week’s highlights below:

Jimmy Fallon was joined this week by Stranger Things star Millie Bobby Brown for a new installment of Singing Whisper Challenge, and they absolutely could not stop cracking each other up with every new song, especially when Fallon had to guess “Despacito.”

The legendary Steve Martin joined Stephen Colbert this week to try and sing an uplifting song in these troubled times. Unfortunately for him, this was the debut of a new Late Show segment called “Stop Steve Martin from Singing ‘We Are the World.'”

Jimmy Kimmel could not get enough this week of the viral “pizza groundhog” in Philadelphia just munching away, “a glimmer of beauty in these depressing times.” Kimmel also tackled the protesters in multiple states pushing to reopen their states despite the serious risks. “You can’t make Americans do anything. We just won’t. If you tell us to do something, we won’t do it. We only exist because someone tried to make us pay extra for tea once.”

This week Seth Meyers checked in with the hilarious John Mulaney and talked about everything from the Real Housewives of New York to Mulaney’s new project with Nick Kroll: Oh, Hello: the P’dcast. In the clip above, Mulaney ends up trying to explain what a “VSCO girl” is to Meyers, and if you don’t know what that is, well, enjoy.

One of the most burning questions for people working at home is whether to dress up or not. So this week James Corden and Schitt’s Creek star Dan Levy played a game of “Am I Wearing Pants or PJs” with several Late Late Show staffers.

Trevor Noah this week checked in with comedian and longtime Daily Show contributor Lewis Black, who’s just as animated and pissed-off in quarantine. And Black is handling the isolation, well, differently. “Fuck your sourdough starter! I’m drinking my toilet wine!” (Noah also had some fun with that ravenous groundhog…)

Samantha Bee spoke with Elizabeth Warren this week as a way of detoxing from President Trump’s daily press conferences, “in search of calming and meaningful leadership.” Warren spoke with Bee about her plans to address the coronavirus and the insanity of states needing to bid on PPE.

John Oliver this week took on a different angle of the coronavirus pandemic: looking at the alarming unemployment numbers and how essential workers are continuing to face serious problems. He also went on a bit of a tangent involving Larry Kudlow and the art world…

Desus & Mero spoke with Joe Biden this week after former President Barack Obama endorsed him. They talked about that endorsement, Trump’s coronavirus response, and what Biden has to say to people reluctant to vote for him.

Conan O’Brien had some fun at the Biden camp’s expense this week, interviewing the former veep’s “campaign manager.” And from the get-go, she didn’t exactly seem very excited about her own candidate. “Today he asked me if I was the new coffee gal.”

David Spade talked this week with Lindsay Lohan, video chatting from Dubai. Lohan talked about her music — she recently released her first new single in years — and even broached the idea of a Mean Girls sequel down the road.

Tonight Fallon, Colbert, and Kimmel will be co-hosting the “One World: Together at Home: special, created in collaboration with Lady Gaga and featuring some big names like Andrea Bocelli, Elton John, Kerry Washington, and Paul McCartney.