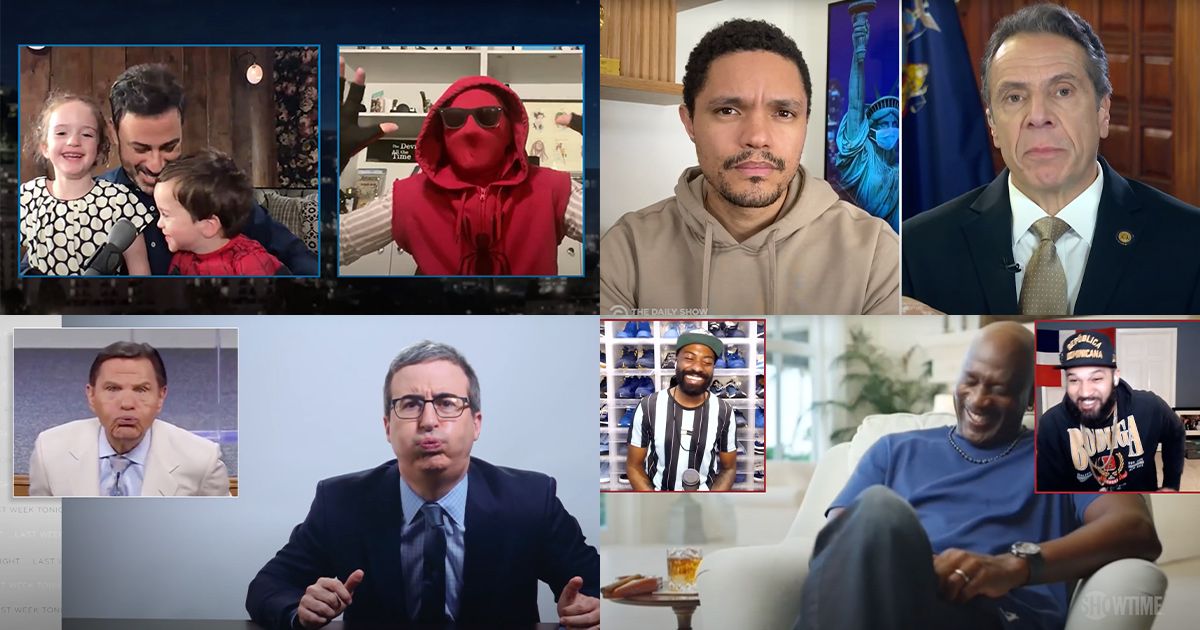 This is week six of all of late night stopping normal production during the coronavirus pandemic. But hosts have continued doing shows from home and brought in plenty of special guests to entertain viewers. We’ve put together some of this week’s highlights below:

The Tonight Show with Jimmy Fallon

This week Jimmy Fallon invited on Sean Evans, the host of the popular show Hot Ones, to moderate a friendly round of increasingly-spicy wing-eating with Alex Rodriguez. And Evans — who’s been on the show before — put Fallon on the hot seat about which celebrity had the worst reaction to the spicy torture.

You may have been transfixed by the mayor of Las Vegas’ wild CNN interview earlier this week, and Colbert mercilessly mocked her proposal to prematurely reopen the city. Especially when she said she’s not a gambler. “Well, sure, not with your life…”

This week Sony announced the next Tom Holland Spider-Man movie has been delayed. But in the meantime, Holland joined Jimmy Kimmel this week, chatting about some Marvel stuff, but more importantly, surprising Kimmel’s son Billy for his third birthday in just a really delightful moment.

This week you may have seen that surprisingly soothing viral video of Stanley Tucci making a negroni. Well, James Corden brought Tucci on his show this week to help him make his first-ever martini, in one of the classier quarantine late night segments.

Trevor Noah spoke with Andrew Cuomo this week for the governor’s first late night interview during the coronavirus pandemic. Cuomo talked about his recent meeting with President Donald Trump, acknowledging POTUS doesn’t exactly like him but said that “my feelings are irrelevant” to the job they have to do now.

Samantha Bee this week spotlighted the hospital workers across the country still need vital PPE—the people directly hurt by this and the people trying to help address those shortages. (Including an 8th grader utilizing a 3D printer.)

John Oliver focused on another angle of the coronavirus this week — the misinformation shared by President Trump, conservative media, and even televangelist Kenneth Copeland trying to destroy COVID-19 with “the wind of God.” Oliver tried to see if that strategy could help “make this irresponsible media magically disappear.” (Spoiler: not so much.)

Lots of businesses are using Zoom during quarantine to keep working and interacting with coworkers. And this week Conan O’Brien decided to randomly crash a tech company’s Zoom meeting with some hilarious results.