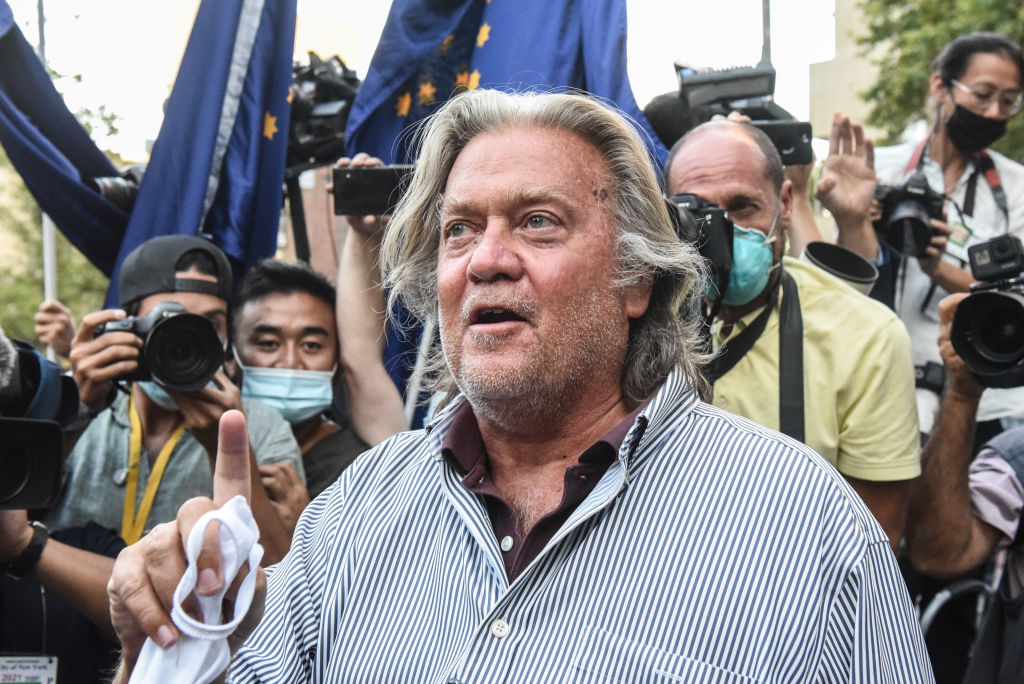 Mark Ruffalo, John Cusack and Judd Apatow are among the celebrities weighing in on Steve Bannon’s arrest. On Thursday, the former White House chief strategist was charged with defrauding hundreds of thousands of donors through his fundraising campaign, “We Build the Wall.” As one might predict, Hollywood was both outraged and delighted by the news of Bannon’s legal woes.

Bannon and three associates were indicted for allegedly raising more than $25 million to build a wall along the southern border of the United States, as President Donald Trump promised in his campaign, but then using a chunk of the funds for personal gain. Prosecutors are accusing the former Trump advisor of personally taking $1 million from the campaign. Bannon was aboard a friend’s private yacht near Connecticut on Thursday when he was apprehended by the US Postal Inspection Service, a unit of the US Postal Service that specializes in mail fraud.

Bannon, however, is denying the fraud charges against him. On his podcast, War Room, on Friday, Bannon dismissed his arrest as a “political hit job.” Hollywood disagrees. In addition to the names mentioned above, Chelsea Handler, Rosie O’Donnell, Mark Hamill and many others are eager to see Bannon and his alleged cohorts behind bars.

As we noted in a post Friday morning, late-night hosts Jimmy Fallon, Seth Meyers and Trevor Noah weighed in on Bannon’s arrest on their respective talk shows. Much like celebrities in the Twitterverse, the talk show hosts found humor in the situation. Check out Twitter reactions below from several stars, who were quick to share their thoughts on another member of Trump’s inner circle facing legal trouble.

Actually, I feel sorry for the #MAGA people that Bannon and all Trump’s cohorts have ripped off. They have been so mislead and deceived. They have been tricked into thinking their problems are because of immigration and race. FoxNews and RW media have set the stage for this.

People should ask what he was doing on the current campaign. https://t.co/QMXMMzaiZx

Maybe the post office arresters were the closest ones that had a boat – to go get bannon on the boat –
What an insane era –
If we survive this – ask yourself – did you turn a blind eye
Or did you fight ?

Steve Brannon getting carted off a yacht to be arrested is the kind of news that will give me the vibes to work out twice today. A perfect arrest story for a human herpe.

Dear @Dictionarycom: Can you share the definition of “karma?” https://t.co/85lakVCgvd

It’s almost as if everything tRump touches… dies.
I bet somebody is gonna write a book about it someday.#TickTocktRump https://t.co/z9R3fPFPQR

With the USPS arresting Bannon, we’re bringing all the loose ends together. Next time we see the murder hornets, betcha Trump’s in the bunker.

Steve Bannon in custody for fraud. Another feather in the cap of the most Criminally Corrupt President in our Nation’s history.

Yes, it’s true! #SteveBannon is out on bail, but he’s not allowed to travel on private planes or boats. Guess he’ll just have to glide along on his own slime trail.

Kids Kobach who claimed but couldn’t find any voting fraud is caught up in this racket to steal money. They even manufactured fake invoices. https://t.co/wyzjsiqaXj

Trump has tried to distance himself from the We Build the Wall liars & crooks but founder Brian Kolfage has bragged about their ties. https://t.co/CrLF2E6vUi