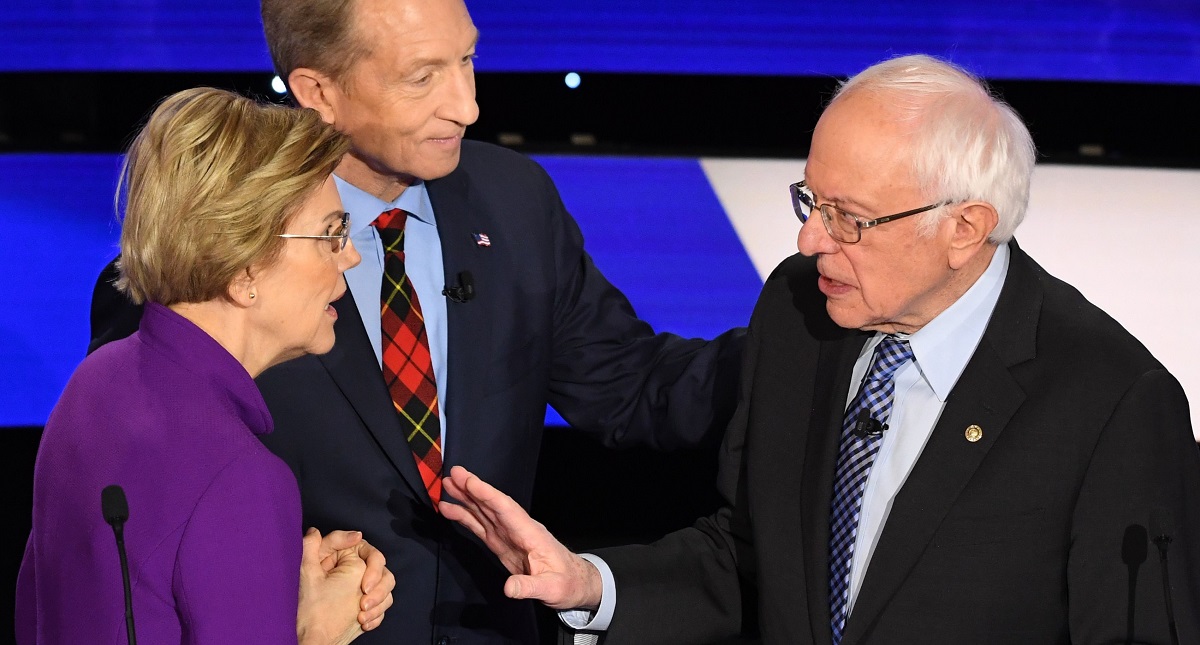 Tuesday night’s CNN/Des Moines Register Democratic presidential debate saw the culmination of an intense 24 hours during which a bombshell story emerged that Sanders had told Warren — during a private meeting in December of 2018 — that a woman can’t win the presidency against President Donald Trump.

Sanders responded by accusing the Warren campaign of leaking the story, and of “lying” about what happened at that meeting, so Warren was forced to set the record straight. In a statement, she confirmed that at that meeting, “Among the topics that came up was what would happen if Democrats nominated a female candidate. I thought a woman could win; he disagreed.”

The controversy came up during the debate, where Sanders repeated his denial, Senator Warren repeated her confirmation, then deftly pivoted to an empowering response about the electability of women.

The debate ended with a viral moment in which Warren declined to shake Sanders’ hand, the pair spoke for a few seconds, and parted with some chilly body language from Sanders. But some Sanders supporters took things to the next level, blanketing Warren’s Twitter replies with snake emojis and GIFs.

Current Affairs editor Nathan Robinson noted the trend hours after the debate, writing “all the twitter replies to Elizabeth Warren’s posts now are just increasing numbers of snake emojis,” along with a sampling of said phenomenon.

The first replies to Robinson’s tweet were revealing, as Jodi Jacobson called the trend “disgusting,” and another user with the handle “SeanHavs” told her to “Fuck off you tsk tsking fraud. You didn’t care when they smeared Bernie.”

Fuck off you tsk tsking fraud. You didn’t care when they smeared Bernie.

Progressive writer Emily Crockett called the Sanders supporters’ actions “appallingly sexist,” and called on Bernie Sanders to “tell his supporters in no uncertain terms to knock it off.”

“I mean, SNAKES?? The literal ORIGINAL symbol of why women can’t be trusted??!” Crockett elaborated.

I mean, SNAKES?? The literal ORIGINAL symbol of why women can’t be trusted??!

(And yes, women can also be sexist against other women, because sexist tropes are the toxic sludge we are all raised with.)

Crockett had a ready answer for the copious replies insisting that it wasn’t sexist, writing “Whole lotta Totally Not Sexist galaxy-brains on here arguing that because snakes can have multiple symbolic meanings, it’s fine to deploy them in Gamergate-style swarms to insist a woman is lying about a pretty mild discussion of sexism she had once.”

Whole lotta Totally Not Sexist galaxy-brains on here arguing that because snakes can have multiple symbolic meanings, it’s fine to deploy them in Gamergate-style swarms to insist a woman is lying about a pretty mild discussion of sexism she had once.

The trend even caught the notice of CNN political analyst Chris Cillizza, who also noted that the #NeverWarren hashtag was trending, and observed that “Bernie allies took to Twitter to attack the Massachusetts senator as a lying snake. (Not kidding; snake emojis were everywhere in the anti-Warren tweets.)”

As of Wednesday morning, the hashtag #neverWarren was trending as Bernie allies took to Twitter to attack the Massachusetts senator as a lying snake. (Not kidding; snake emojis were everywhere in the anti-Warren tweets.) https://t.co/bAlRRDvCkG

There were others who saw echoes of 2016, like former Harry Reid senior aide Adam Jentleson.

If Bernie had spent this campaign reaching out to people who weren’t with him in 2016, he’d be the dominant frontrunner and probably the nominee. Instead, 20 days before Iowa, his insular supporters are congratulating themselves for tweeting snake emojis at his closet ally. https://t.co/vD5b1dJicg

Bernie’s snake posters are a tiny, unrepresentative fraction of his wonderful supporters. He is ill-served by them because they pollute his powerful message and push people away. This has been an issue for years and he’s never made any real effort to address it. That’s a mistake.

Some people supportive of Sanders spoke up to call out the emoji swarm, recognizing its unhelpfulness to the cause.

it just stresses me out because I want people to like & vote for Bernie, and the snake emojis and harassment campaigns are not exactly helping the cause https://t.co/leSLJDZG7r

Defenses of the snake emojis were few and far between.

I’m angry at Sen Sanders for not monitoring his supporters every move online as they drop snake emojis on Elizabeth Warren’s tweets. First, Warren lied on Sanders twice in asanyvdays leading up to the debate and the refused to shake his hand after the debate. She is a snake. https://t.co/351G9tHVyT

Warren and Sanders both departed Drake University, the site of Tuesday night’s debate, without taking questions from the media.