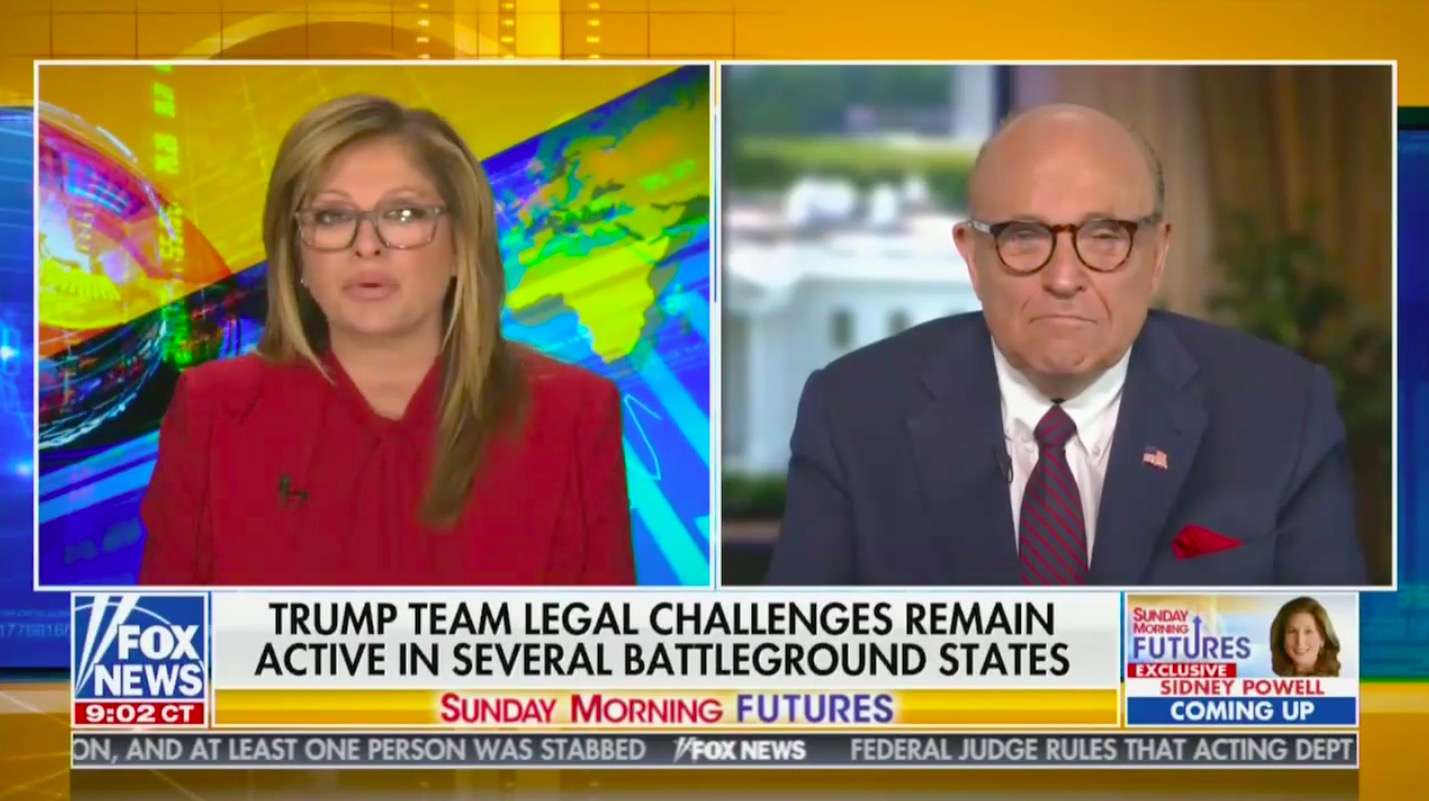 Smartmatic, a voting technology firm that has been the subject of conspiracy theories involving the 2020 presidential election, has sent demands for retractions to Fox News, Newsmax and OAN for airing “false and defamatory statements” about the company.

In a lengthy legal notice sent on to Fox News — and obtained by Mediaite — Smartmatic demanded the retraction of dozens of comments made by hosts Lou Dobbs and Maria Bartiromo, as well as Trump lawyers Rudy Giuliani and Sidney Powell, who appeared frequently as guests on the network.

Voting machine manufacturers have been the subject of rampant conspiracy theories since President Donald Trump and his legal team began their half-baked assault on the 2020 election.

Smartmatic, a voting technology firm used in elections around the world, has been one of the most intensely targeted companies. Many of the allegations against the firm have been debunked, but are still spread by Trump loyalists on sympathetic news networks.

Some of the nuttier claims pushed by Trump lawyers like Rudy Giuliani held that Dominion Voting Systems was a front for Smartmatic, which was being used to flip millions of votes from Donald Trump to Joe Biden, in a conspiracy orchestrated by George Soros and the late Venezuelan leader Hugo Chavez.

Despite being the subject of such a vast conspiracy to steal the presidency from Trump, Smartmatic said in a statement that it was barely involved in the 2020 U.S. election, working in just one single county: Los Angeles County.

In the letter sent on to Fox News, Smartmatic accused the network of a “disinformation campaign”:

Fox News has engaged in a concerted disinformation campaign against Smartmatic. Fox News told its millions of viewers and readers that Smartmatic was founded by Hugo Chávez, that its software was designed to fix elections, and that Smartmatic conspired with others to defraud the American people and fix the 2020 U.S. election by changing, inflating, and deleting votes. While Fox News holds itself out as a trusted news source, it has continually and repeatedly published demonstrably false information and defamatory statements about Smartmatic. Fox News used its anchors and on-air guests, including Rudy Giuliani and Sidney Powell, to spread lies about a company that had absolutely nothing to do with the voting that took place in areas at the heart of the “conspiracies” discussed following the 2020 U.S. election.

The statements identified in the letter to Fox News include a series of claims (like the allegation that Smartmatic is a Venezuelan company with ties to Chavez, and that it has ties to Dominion) seeking to support the broader conspiracy theory that voting systems were used to steal the election.

The firm said the network aired such claims despite being refuted by “readily verifiable facts.”

Fox Business hosts Bartiromo and Dobbs have given ample air to claims supporting the conspiracy theory that Trump was the true winner of the November election, despite his campaign’s failures to prove so in court.

In an interview with Reuters, Antonio Mugica, the CEO of Smartmatic, said the baseless attacks from Trump and his allies have harmed the company’s reputation abroad.

In its letter to Fox News, Smartmatic estimated its losses from the “disinformation campaign” in revenue and valuation are in “the hundreds of millions, if not billions, of dollars.”

Smartmatic is demanding a retraction from Fox News by Tuesday, December 15 (that’s tomorrow). Should the network refuse, the firm said it has “retained legal counsel that has brought some of the largest defamation matters in U.S. history” and is exploring legal action.

Fox News did not respond to a request for comment.

“Making demonstrably false accusations against companies like Smartmatic is, in essence, attacking the whole system by which democracy operates,” Mugica said in a statement to Mediaite. “We are not only defending our company, but the democratic process itself.”