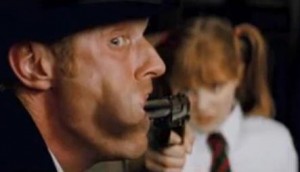 The newest trailer for the upcoming comic book adaptation “Kick-Ass” is getting a lot of attention on Twitter today, thanks to tweets and re-tweets by the likes of Rob Corddry, Jake Tapper, and TV’s Andy Levy. The R-rated trailer features copious violence and profanity, but the clip’s heat is generated by the source of the mayhem: 12-yr-old vigilante Hit Girl.

Is this a post-ironic hoot, or the end of western civilization as we know it? You tell me.

Since I tweeted this, TONS of responses about the cursing, NONE about the violence. Way to be consistent America.

The trailer certainly achieves the intended effect, turning neutered kiddie movie cliche´s into bloody piles of goo, and it’s certain to get a lot of attention. It sure got mine.

From a political standpoint, this trailer is a bit of a contradiction. While conservatives aren’t likely to appreciate the profanity, they’ll surely agree that if all 12-year-olds carried handguns, there would be little or no wedgie-ing. Liberals might appreciate the puncturing of gender roles, but be dismayed at the lack of safety equipment.

Personally, this trailer just made me feel hopelessly out of the loop. I actually had to use the Google to find out what a “Red Band Trailer” is. (It’s a trailer that can only be viewed by people who claim to be 17 or older.)

The film itself sounds, um, kick-ass. The hero is a regular high school kid who decides to become a superhero, despite having no powers, just because. It’s a funny premise, and if the trailers are any indication, the action is first-rate.

While Hit Girl takes the conceit to 11, the idea of bad-ass kids is not a new thing to cinema, although Hollywood narrative tradition usually requires some kind of mitigation. In “Taxi Driver,” Jodi Foster‘s pre-adolescent prostitute Iris is “rescued” and returned to proper living. In “Robocop 2,” malevolent drug-dealing waif Hob goes all vulnerable in his death scene.

One possible exception is Natalie Portman‘s Mathilda character from “Leon: The Professional,” who ends up in a safe place, but who doesn’t really shed her relish for vengeance.

Will scenes like those in this trailer lead to pickets and boycotts? In a world where there’s no such thing as bad publicity, that’ll be a win-win for a film like this. Perhaps those who think this movie will be a bad influence on their kids should teach their kids not to sneak into R-rated movies.

Update: Chloe Moretz, The actress who plays Hit Girl, is 12, but according to the character’s Facebook page, Hit Girl herself is only 11.