Add This Brash Billionaire’s Name to Hillary’s List of VP Possibilities…Because Why Not?

Add This Brash Billionaire’s Name to Hillary’s List of VP Possibilities…Because Why Not? 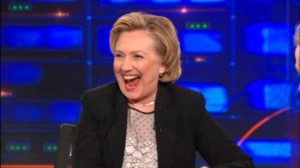 It’s becoming pretty clear that Hillary Clinton is already struggling with how to handle Donald Trump.

On one hand, she likes to exude an aura of being above-it-all, of gravitas, when it comes to responding to all of the verbal salvos he’s been throwing the Clintons’ way since becoming the presumptive GOP nominee a few weeks ago. The “He can run his campaign however he likes” and “I’m not going to respond to that” answers have morphed into playing the same unqualified card she did with Bernie Sanders (of course, she didn’t say those exact words with the latter, but sure as hell implied it to the point the Washington Post ran this headline on April 6th):

Clinton questions whether Sanders is qualified to be president

The charge — even if not precisely worded that way — fell flat. And Bernie just keeps racking up victories — 9 of the last 15 contests to be exact — as Clinton stumbles to the finish line for a nomination that was supposed to be secured many months ago if you read any analysis of the race at this time last year. But Hillary and her team are tone deaf more often than they should be, so instead of retiring the whole unqualified mantra, Clinton went to that dry well again, this time with Teflon Don(ald). Of course, lost in all of this is the rich irony that there’s only one candidate remaining currently under FBI investigation… an investigation that may end up disqualifying her (although not likely given the Too Big To Jail aspect).

So how does Clinton handle Trump without making the mistake of getting down in the mud with him? Marco Rubio tried it… and we all know how that turned out. Jeb Bush did as well, leading to, well… the kind of awkward moments that come when being someone you’re simply not. And as we’ve heard in cable news analysis more than a few times lately when discussing a counter-punching strategy in quoting George Bernard Shaw (“I learned long ago, never to wrestle with a pig. You get dirty, and besides, the pig likes it.”), trying to out-Trump Trump is just not the way to go.

But what if Hillary can find an almost-as-obnoxious pitbull to do the dirty work for her? Enter Mark Cuban, who will have this exchange with Chuck Todd on Meet the Press this Sunday on NBC per an advance preview issued by the network:

CHUCK TODD: You joke that you would love to be Clinton’s running mate, as long as you were allowed to throw bombs at Trump. If she really did come to you, would you listen?

MARK CUBAN: Absolutely. But the key would be that she’d have to go more to center. I like the fact that Senator Clinton has thought-out proposals. That’s a good thing because at least we get to see exactly where she stands. But I think Senator Sanders has dragged her a little bit too far to the left. Things like college tuition and, you know, other business elements that really, I think, could hurt the economy. If she’s willing to listen, if she’s willing to, you know, hear other sides of things, then I’m wide open to discussing it.

Clinton/Cuban 2016? Before saying that’s the silliest thing you’ve ever heard, go back in time to May of 2015 and tell your past-self the following:

“Get this: Donald Trump isn’t bluffing this time… He’s really running for president. And in the end, he’s going to swiftly eliminate all 17 of his Republican opponents by this time next year while Hillary Clinton is going to fight Bernie Sanders all the way — and possibly through — an ugly revolt of a Democratic convention in Philadelphia.”

What do you think your May-of-2015-self would think of that news after breaking three ribs from laughing so hard?

Hillary has a how-to-handle-Trump problem. As noted in this space yesterday, all major polls are trending his way. Hillary’s double-digit lead just one month ago has been cut to 6 points, 3 points, 1 point… and she even trails in the Fox, Rasmussen and ABC polls. The wind is at his back. Much of the negative press he receives not only gets brushed off, it gets boomeranged back into a net-positive.

Former DNC Chairman — when the person who held that title actually had credibility and a clue — and current Virginia Senator Tim Kaine is safest (and arguably best) choice to be Clinton’s running mate. But if the goal is to try to neutralize Trump and win this battle where it’s undoubtedly going to end up (the rhetorical swamp), maybe Mark Cuban — another brash, unfiltered and unapologetic billionaire businessman with a reality show of his own, is worth at least taking a good look at.

Because in an election year when just about anything can happen, it would only be fitting if Cuban got the nod, right?