America First? Trump Folds to China Demand of No Questions From Reporters
SAD!

America First? Trump Folds to China Demand of No Questions From Reporters 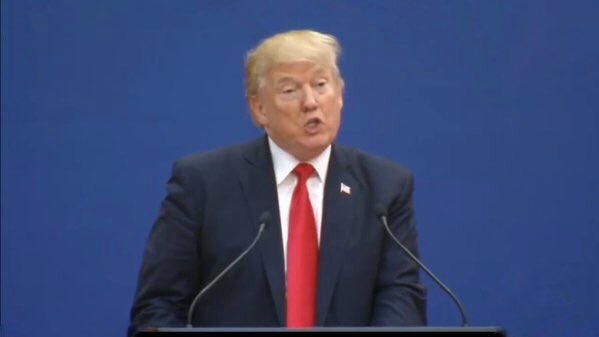 During President Donald Trump’s first official visit to China, he opted to not hold a joint press conference with President Xi Jinping — breaking decades of precedent where US leaders have insisted on taking reporters’ questions in the repressive communist regime.

Per White House press secretary Sarah Huckabee Sanders, the traditional China-US presidential presser was not held because “it was at the Chinese insistence there were no questions today.” Traditionally, US presidents have not bent-the-knee to the anti-press demands of the Chinese government, but clearly Trump agreed to the terms.

Asked why President Trump didn’t take questions from reporters today, Sarah Sanders said, “It was at the Chinese insistence there were no questions today.”

For refusing to stand-up to China’s authoritarian media policies, Trump was blasted on Twitter by pundits and journalists, many pointing out this decision portrays the president — despite all his tough talk — as week and skittish compared to his predecessors:

Perhaps this is a hazard of cultivating domestic antipathy toward the press. A failure to appreciate and stand up for liberal values where they are threatened. https://t.co/V2ysKRIqAJ

I once had to tell Chinese officials that Pres. Obama would not show up for the press avail unless there would be a Q&A. They backed down. https://t.co/Z2LdwSYK9k

The Chinese government never wants to take questions from US reporters. In the past American presidents have insisted upon it as a demonstration of standing up for the freedoms our nation believes in. 1/ https://t.co/2af9t7ArOU

4/ there’s nothing strong about acceding to the wishes of an oppressive Communist government by going along with its contempt for freedom of the press. One can issue as many condemnations of Communism as one wants on paper; they’re meaningless if one then bows to totalitarianism.

5/ here’s President Bill Clinton holding a joint presser with the Chinese President at the WH, where questions came on Taiwan, human rights and Tiananmen Square. https://t.co/FfYjD6A6Pk

China isn’t supposed to have a say about press access. Previous press secs used to fight with Chinese counterparts for press access when in China. Witnessed personally. https://t.co/IWMgOoy7ZB

Ahead of Asia trip some worried White House wouldn’t stand up for US Press and US Press values. Welp…—-> https://t.co/OQr7g85VaG