America Just As Partisan As Its Cable News Channels

America Just As Partisan As Its Cable News Channels 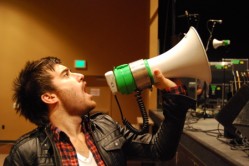 NPR is currently conducting an online survey to see whether its listeners/readers agree or disagree with the White House’s ‘war’ on Fox News. So far close to 200,000 people have participated, which is perhaps not surprising considering the listener numbers that NPR enjoys nationwide. What is surprising however is the results.

Sixty percent or 118,081 people chose ‘the White House on this one; Fox News isn’t “fair and balanced.”‘ Which actually is sort of a low number if you consider that in the big picture NPR listeners tend to skew to the left.

Thirty-nine percent or 76,324 people chose ‘Fox News on this one; it asks questions others don’t and the White House should be able to handle them.’ Which means there are a lot of people out there who count both Fox News and NPR as news sources (strange bedfellows indeed!) and/or really does think the White House should be able to handle Fox, or the right-wing blogs have got a hold of this survey. Let’s air on the side of non-cynicism and just assume more people enjoy both than someone living in NYC might suspect.

Here’s the most fascinating and disturbing part however: Only two percent or 3,095 people chose ‘Neither side. They’re both trying to play this “feud” to their advantage.’ Really? REALLY? That is amazing to me. Only three thousand people are willing to go the slightly cynical, middle ground route? Aren’t NPR listeners supposed to be more savvy than this? Is there really so few people out there occupying the middle ground (CNN ratings numbers may further suggest the answer to this is yes). The fact so few people chose the middle ground option suggests that perhaps it is not the cablers that have been dividing the country with skewed coverage, but the country that has instead forced the cablers into their own corners. Thus far it’s certainly paying off for everyone involved; long-term forecast still cloudy. You can cast your vote here.