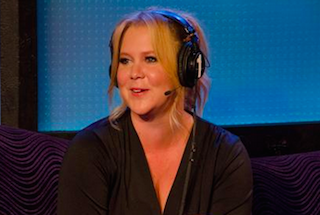 Last week, in an interview with The Daily Beast, comedian Amy Schumer revealed that she was approached about taking over as host of The Daily Show but decided to turn it down. Today, Howard Stern asked her what she was thinking.

Once the news came out that Comedy Central had also offered the gig to Amy Poehler and Chris Rock, Schumer figured there was no harm in talking about her own reasons for declining the once-in-a-lifetime offer. “If I heard that I was hosting The Daily Show, I would be like, ‘Give me a fucking break,'” Schumer told Stern.

Schumer added that just the offer from the network made her cry and given the potential financial benefits she did seriously consider doing it. “But I just pictured all the fittings, the blazers I’d have to wear and I was like, I don’t want to do that,” she said. “So, I really thought about it and I just thought, I don’t think it’s right for me. Trevor [Noah] will be so much better at it than I would ever have been.”

Schumer, who has her first movie that she wrote and stars in, Trainwreck, comes out this month, told Stern that accepting a “secure” gig like The Daily Show would have amounted to “betting against” herself. Instead, she said she wanted to “bet on myself that I can do more.”

With Trainwreck, which has long been described as the second coming of Bridesmaids, currently sitting at 100% on Rotten Tomatoes with early reviews, it looks like Schumer may have chosen wisely.