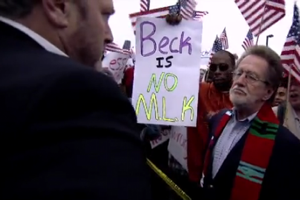 Andrew Breitbart is back! After some down time following the summer’s biggest non-mosque scandal, Breitbart.tv has released footage flipping the meme of the angry Tea Party protester on its head– or at least that seems to be the objective. After finding out that some liberal protesters had decided to camp out near the venue of an event he was headlining with Glenn Beck, Breitbart decided to face the crowd and ask, “what are you protesting?”

Well, there were other questions, too, like “how much are you being paid?,” followed closely by “you don’t even know why you’re here.” To his challenges, Breitbart received mostly jeering, though one brave protester acknowledged that he was protesting to “stop the hate,” namely from Beck and the Tea Party. When challenged to give an example, the man replied, “I’m not going to fall into your trap.” According to the video, Breitbart’s address to them made them leave “on their school buses,” admitting defeat. The footage does show them leaving.

The video is vintage Breitbart, in that ultimately it will rile up his supporters into action and anger his detractors into calling him a fraud– same old, same old. And, of course, there’s the third group of media consumers that will love the video for its entertainment value– think the people who couldn’t stop watching Breitbart’s catchphrase-laden exchange with David Shuster earlier this year (“You convicted him on Twitter!”). Audience perspective aside, Breitbart is redefining the game by physically facing and talking to his opponents– unlike, say, Sarah Palin, who can’t even get herself to talk to a TV personality that isn’t Sean Hannity. How many political figures, when notified of a protest of an event they are headlining, would willingly confront the crowd and allow them to hold him accountable? Not more than a handful.

Generally, there are two types of Andrew Breitbart videos: the kind in which some malicious left-wing behavior is exposed via hidden camera or secret footage, and the type where Andrew Breitbart himself confronts his enemies face-to-face. The former is often the more effective to parachute Breitbart and his operation straight to the top of the news cycle; the former is often significantly more telling of the national political climate, and far more entertaining. And having Andrew Breitbart back in top form after the Shirley Sherrod mess is a welcome return to normalcy.