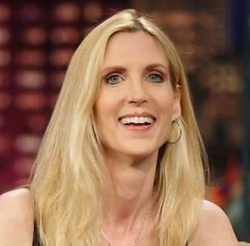 Is Republican party going to pieces over Michael Steele? Steele’s recent comments about Afghanistan sparked a slew of harsh criticism over the weekend from a number of GOP heavy hitters including Bill Kristol and Sen. John McCain who both called for him to step down as RNC chair. Steele has kept a low profile this week following the blow-up but perhaps he can take heart that he apparently has Ann Coulter in his corner. Slim pickings, but support nonetheless.

Coulter writes in her column yesterday that Steele is “absolutely right” in his claim that Afghanistan is Obama’s war and if certain members of the right don’t like it, namely Bill Kristol and Liz Cheney, they should resign.

Our troops are the most magnificent in the world, but they’re not the ones setting military policy. The president is – and he’s basing his war strategy on the chants of Moveon.org cretins.

Nonetheless, Bill Kristol and Liz Cheney have demanded that Steele resign as head of the RNC for saying Afghanistan is now Obama’s war – and a badly thought-out one at that. (Didn’t liberals warn us that neoconservatives want permanent war?)

I thought the irreducible requirements of Republicanism were being for life, small government and a strong national defense, but I guess permanent war is on the platter now, too.

Of course, if Kristol is writing the rules for being a Republican, we’re all going to have to get on board for amnesty and a “National Greatness Project,” too – other Kristol ideas for the Republican Party. Also, John McCain. Kristol was an early backer of McCain for president – and look how great that turned out!

Inasmuch as demanding resignations is another new Republican position, here’s mine: Bill Kristol and Liz Cheney must resign immediately.

Smack! But interesting in so far as Kristol and Cheney are heavyweights on the conservative right (though of the two I suspect Cheney has managed to establish slightly more gravitas these days than Kristol, who is too often the subject of ridicule) and to the best of my knowledge rarely the subject of in-party bickering. In the larger sense, it’ll be interesting to see what the Republican party looks like after November — normally its the Democrats that go to pieces when the pressure’s on but the GOP is certainly giving them a run for their money in that department this year.