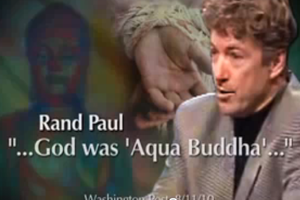 After the news broke this summer of Kentucky Republican Senate candidate Rand Paul‘s unsavory college pranks involving marijuana and Aqua Buddha, it seemed inevitable that his opponent would make a comically melodramatic attack ad referencing the closest thing to paganism in politics this side of Christine O’Donnell‘s witchcraft. In fact, had Jack Conway not made this ad, he’d probably be one of the worst campaigners in history.

Using what appears to be an old photo of Paul sporting quite the unfortunate ‘do, the ad spares no subtlety in targeting Kentucky Christians. Conway accuses Paul of being a member of a “secret society” that called the Bible a “hoax” and “mocked” Christianity. It then continues, breathlessly retelling the legend of Aqua Buddha: In college, an old (probably former at this point) friend of Paul’s accused him and some friends of kidnapping her, tying her up, and forcing her to worship Aqua Buddha.

Then the ad gets to the meat and potatoes of why Paul’s religious beliefs (drugs) would interfere with his ability to govern: Paul, the ad claims, would end faith-based initiatives. That’s about as substantive as the ad gets before leaving the audience with this: “Why are there so many questions about Rand Paul?”

Good question, but Paul would like the people of Kentucky to answer another question: who is asking so many questions about Rand Paul? Paul has threatened to cancel his final debate with Conway after not shaking Conway’s hand after the last one; when asked for comment, Paul told the media, “I will not shake hands with someone who attacks my religion and attacks my Christian beliefs.”

While Paul seemed gravely insulted, all in all Conway does a pretty good job of endearing Paul to atheists and pranksters, though the extent to which those are contested demographics in Kentucky is debatable.

The ad, appropriately titled “Why?”, below: