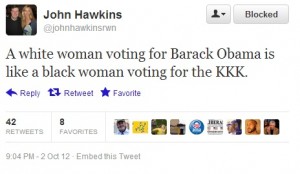 While the rest of the world guffaws at the Drudge-hyped, Tucker Carlson-discovered, Sean Hannity-amplified racial bombshell that fizzled last night, the Mitt Romney campaign turns out to be the ones dealing with the aftermath. Already on the spot to deny involvement in the racially-charged attack on President Obama, which even many conservatives acknowledge is hurting Mitt Romney, it now turns out that the White Panic the tape was meant to evoke found a willing target in John Hawkins, a conservative Townhall commentator who was recently featured on the Romney campaign’s official blog.

During the now-infamous Hannity broadcast of the breaking five year-old scoop that his network aired five years ago, Hawkins tweeted that “A white woman voting for Barack Obama is like a black woman voting for the KKK.”

Forget, for a moment, the inherent racism of the Hannity/Carlson theory that criticizing the Bush administration’s response to Hurricane Katrina (while explicitly saying it had nothing to do with race) is racist because a black guy was saying it to a black audience in a black accent. Forget the sick racism inherent in comparing the first black President with an organization that terrorized, tortured, murdered, and raped black people (and even some white people) for over a century. Rather, don’t forget them, but add to them the deep-dish racism of specifying “white women” as particularly imperiled by our first black President, the theme of thousands of lynchings.

The above tweet is from John Hawkins. You may remember him from all of end of last week, when he wrote that hilarious column about how Mitt Romney just cannot stop saving people’s lives! And the Romney campaign, pathetically, put it on their own website! What could go wrong when you are posting shit from people who write at Stormfront starter drug Townhall.com? Well, a few days later, they could tweet that a white woman voting for the president is like a black woman voting for the KKK, for starters. (And by “could,” we mean “DEFINITELY WILL, EVERY TIME.”)

That column by Hawkins still appears on the Mitt Romney campaign’s official blog, as of this writing.