Obama Wanted To Put Osama Bin Laden On Trial If Captured Alive, According To Report

Obama Wanted To Put Osama Bin Laden On Trial If Captured Alive, According To Report 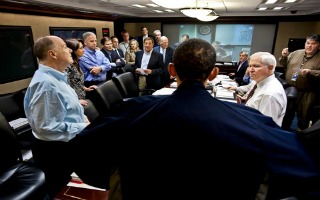 A report in Vanity Fair released Wednesday indicates that President Barack Obama thought that if Osama bin Laden was captured alive, it could provide an opportunity for his administration to resurrect early plans to put terrorist leaders on trial in civilian courts. The president revealed he thought a civilian trail and imprisonment for bin Laden could avoid making a martyr out of him by killing him on the battlefield and would display the superiority of a America’s legal system.

In the Vanity Fair exclusive, Mark Bowden, author of Blackhawk Down, reveals his inside information from sources like Central Intelligence Agency Deputy Director Michael Morell and President Obama himself.

According to Bowden in the story—in November’s Vanity Fair—in the unlikely event that bin Laden surrendered, Obama saw an opportunity to resurrect the idea of a criminal trial, which Attorney General Eric Holder had planned for Khalid Sheikh Mohammed. This time, the president tells Bowden, he was prepared to bring bin Laden back and put him on trial in a federal court. “We worked through the legal and political issues that would have been involved, and Congress and the desire to send him to Guantánamo, and to not try him, and Article III.” Obama continues: “I mean, we had worked through a whole bunch of those scenarios. But, frankly, my belief was if we had captured him, that I would be in a pretty strong position, politically, here, to argue that displaying due process and rule of law would be our best weapon against al-Qaeda, in preventing him from appearing as a martyr.”

Bowden’s report contradicts reports that several of Obama’s senior advisors and administration members opposed the raid on bin Laden’s compound in Abbottabad, Pakistan. He says that the only dissenters were Vice President Joe Biden and Defense Sec. Robert Gates. In the end, the option to take out Osama bin Laden overcame reluctance to engage in the raid or perform a riskier operation to take the target captive.