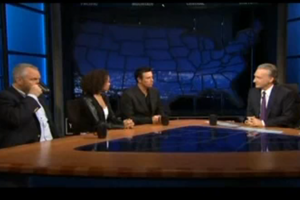 When it was announced earlier in the week, a round table on Real Time with Bill Maher involving Andrew Breitbart and Seth MacFarlane sounded like a guaranteed shoutfest, with Amy Holmes of the Talk Radio Network caught in the crossfire. For anyone who eagerly popped the popcorn thinking Bill Maher was going to make it a bad night for his right-wing guests, it was a disappointing event: the discussion was amicable, civil, and shockingly ended in agreement.

The Maher that showed up to this debate– about health care reform, and, later, the failure to repeal Don’t Ask Don’t Tell– was more concerned with pointing out his outrage against President Obama and the Democrats than making any repetitive points about conservatives, with which he clearly does not agree. He refused to understand why Democrats did not campaign on health care reform, to which Holmes and Breitbart retorted extensively that Obamacare is wildly unpopular despite, as Holmes put it, the fact that “they talked about it endlessly.” Between the two of them the phrase “shoved down our throats” came up frequently and, yes MacFarlane was snickering about that in the background. After about the fourth of fifth time used, Maher contested that the time frame in which it was passed makes the throat-shoving theory impossible: “if I had something in my throat for a year, I’d be gay by now.”

Maher continued to blame the Democrats for not being able to adequately prove that their system was better, and here there was a rare moment of visceral disagreement– from Breitbart, who refused to leave the Republicans behind. “[Republicans] are now suffering because of the Tea Party… They’re not even close to what the Tea Party wants out there,” he argued– or, at least, not any closer than the Democrats are. Breitbart also challenged Maher on his supposed libertarianism: “You’re officially not a libertarian anymore, right?… you admit that you have a more European socialist tendency?”

MacFarlane, meanwhile, bided his time until the Don’t Ask Don’t Tell debate, where he accused Congress of being “20 years behind everyone else” and noted the inherent contradiction in fighting in Iraq alongside openly gay armies without objecting, but maintaining the Don’t Ask, Don’t Tell policy. As an olive branch to social conservatives, he suggested an invasion of Iran– “but it has to be all gay guys.”

The chemistry seems to have even lasted after the cameras went out, too! Judging from Twitter, where Breitbart noted that MacFarlane spent a lengthy amount of time talking to his son and MacFarlane seemed excited to get “drunk with Andrew Breitfart,” this seems to be the beginning of a lovely bromance (tweets, for posterity, below).

Last night’s discussion via HBO below: