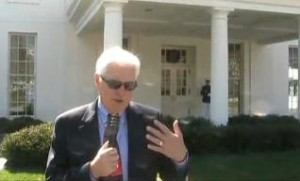 Right-wing media watchdog Newsbusters and influential conservative uber-blogger Ed Morrissey are taking exception to a “Libtalker Meltdown” by my White House press colleague Bill Press. What kind of Toxic Talk did Bill engage in to draw fire from the right? Reacting to a new poll that says 6 in 10 Americans lack faith in President Obama, Press called Americans “spoiled” and “impatient.” I’d say he was being kind.

Here’s some of what Ed says:

It comes as no shock to hear a liberal talk about the American public as “children” who need scolding. (It also doesn’t come as a shock to see that Bill Press doesn’t check the data on jobs before declaring that Obama has rescued them.) That’s the entire mindset of liberalism — that the masses can’t make their own decisions and need a cadre of elites to do it for them.

That same poll shows an even worse number, 72%, who have lost faith in Republicans in Congress (the other 28% probably never had any to begin with).

I think Press was expressing the sentiment best summed up by Winston Churchill‘s famous quote, “The best argument against democracy is a five-minute conversation with the average voter.” The tendency of human beings to want simple, easy answers for everything cuts both ways. Rush Limbaugh could have delivered a similar rant to explain President Bush’s low poll numbers.

A certain amount of President Obama‘s poll numbers belong to him. The “Bikini graph” notwithstanding, Americans are still hurting. The Obama administration can rightly claim that things would have been much worse under Bush-era policies, but they also might have been much better had they pushed for the larger stimulus that most leading economists recommended. They couldn’t have gotten any less Republican votes.

Press notes the fact that President Obama got health care reform passed, but again, if he had been a little less obsessed with getting Republican votes that were never going to materialize anyway, he could have passed a stronger law, months sooner. The public, consequently, would have been more inclined to see the benefits of the law come November.

Still, if you look at historic job approval polls, there’s roughly a third of people who will always approve of a Republican, a third will approve of a Democrat, and the country is controlled by the squishy middle third, who decide our fate based on the view of the world five feet in front of them. Things suck? Must be the President’s fault. Lemme give the other guy a shot.

President Bush was absolutely right to reject the notion of governing based on polls (what he did govern on is a different debate). We elect Presidents and legislators to make decisions based on sound judgment, in the best interests of our country. Human beings will always vote to have their cake, while opposing measures to restrict the eating of it. It’s the government’s job to decide what we actually do with the cake.

At recent White House briefings, I’ve heard Robert Gibbs paraphrase this sentiment, as well. Sometimes, doing the right thing isn’t popular, nor is doing the wrong thing. The challenge, nowadays, is in explaining which it is you’re doing.