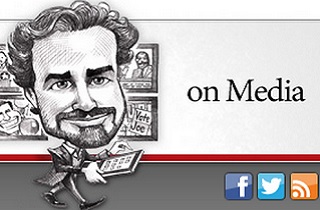 The racial insularity of the mainstream media can’t hold a candle to the insularity of mainstream media criticism, as yesterday’s Dylan Byers Twitter kerfuffle illustrates. The Politico media scribe drew substantial ire and mockery for his dismissive response to a Ta-Nehisi Coates column that posited Melissa Harris-Perry as “America’s foremost public intellectual.”

That column (which is excellent, and which you should read) had more to do with digesting the recent Kierangate controversy than burnishing Harris-Perry’s intellectual cred, but that nugget from the sub-hed was a red flag for Byers, who tweeted “Ta-Nehisi Coates’s claim that “Melissa Harris-Perry is America’s foremost public intellectual” sort of undermines his intellectual cred, no?”

When Slate‘s Matty Yglesias asked Byers for his list, Byers declared that “I’m not sure America has a foremost public intellectual under any definition, but it certainly isn’t a weekend MSNBC host.”

He then stalled for an hour (during which he retweeted someone saying “Great woman; great scholar; great host; but not sure if she’s “America’s foremost public intellectual” and told people who disagreed to “chill”), and responded with his list: “Bernard Lewis, Noam Chomsky, Jeffrey Sachs, Paul Krugman (tho not anymore), E.O. Wilson… Obviously (Susan) Sontag before she died.”

He got immediate blowback for naming five white men and one dead white woman, but it’s also worth noting that while Byers specifically dismissed Harris-Perry as a “weekend MSNBC host,” he put two regular Morning Joe panelists on his list. After that blowback, Byers generously conceded that “One could def. argue that President Obama is America’s foremost public intellectual but it’d require some specific interpretation of terms.”

Byers responded to the outrage by arguing that he wasn’t trying to diminish Harris-Perry, but simply disagreeing with Coates that she’s America’s foremost public intellectual. Something prevented him from seeing that he had summed up Harris-Perry’s accomplishments and talents as “weekend MSNBC host,” and had not just disagreed with Coates, but suggested that his assessment of Harris-Perry was so absurd that it should leech Coates of his own credibility. His list of preferred intellectuals, compiled over the course of an hour, could be a clue.

The insulated point of view that Byers displays here is symptomatic of a broader problem with mainstream media criticism. If black voices are in short supply in the news media, they’re completely absent from the sphere of influential media criticism, and it shows. Executives, producers, and talent at media outlets are reading (in addition to Mediaite) Dylan Byers, WaPo‘s Erik Wemple, now-CNN-er Brian Stelter, and, at least before his move to Fox News, Howard Kurtz. It’s not that there aren’t great black media critics (Eric Deggans comes to mind), but they’re not getting shows, they’re not getting influential print gigs, they are getting on cable news panels as one “side” in race-related stories.

Does that mean that a white male can’t be an effective media critic? No, but it does mean that they’re missing a critical point of view that might cause them to think more deeply about some topics, like whether there are any living women who can crack a top six public intellectuals list, or a living and/or recently deceased black person who rates.

It also might color the type of coverage they give to a network like MSNBC. Byers’ swipe at Melissa Harris-Perry isn’t something new. During Kierangate, he joined CNN in their quest to invent a movement to see her fired. In December, he penned an embittered response to Harris-Perry’s much-misunderstood satirical video essay on the word “Obamacare,” and earlier, accused her of “trolling the right” in one of MSNBC’s Lean Forward ads. Concurrently, Byers developed a major stiffie for MSNBC, penning a screed that posited MSNBC as “worse than Fox News” the same day he spat his “four questions” at Melissa Harris-Perry.

But Byers is not alone in adopting the MSNBC-punching frame. WaPo‘s Erik Wemple recently wrote a pair of columns based on the same MSNBC vs. Fox premise, and similarly concluded that MSNBC was deficient because “opinion,” citing the same Pew poll. These pieces extended the popular media narrative, that Fox and MSNBC are equivalent because they each have a clear point of view, by judging Fox superior because, while they both have a point of view (or “bias”), Fox produces more of what Pew calls “news” programming, while MSNBC produces overwhelmingly more of what Pew calls “opinion” programming.

What they ignore, as Pew did, is the quality of that programming. Does one of these networks routinely get things wrong, make things up, or mislead viewers with its hard news programming? Surely, a bad news segment is far more toxic than a bad, but clearly-labeled, opinion segment. Do these networks cover stories, in either type of segment, that are in the public’s interest, or are of interest to the public? These factors are rarely considered in any mainstream media criticism, and completely ignored in the examples I’ve cited.

There is a clear inertia for these sorts of critiques, which play to a white, conservative audience that is starved for mainstream media approval, and are accordingly rewarded with traffic. But there’s also a blind spot for a network that overwhelmingly appeals to black people, an audience that, coincidentally, isn’t capable, or likely, to provide a traffic windfall to a mainstream press that it has long-since written off as hopelessly apathetic to it. There’s no incentive to look deeper.

But what if Dylan Byers and Erik Wemple stopped to wonder why it is that MSNBC is fairly cornering the black cable news audience, while that audience flees CNN and avoids Fox News like a pile of steaming plague? Are black people just suckers for pandering? An outsider might conclude that it’s a simple matter of POV, or the diversity of the hosts, or the reverse of the alienation black viewers feel from the other networks. Those could all be factors, but someone with a different point of view might stop short of publishing a simplistic, incomplete analysis, and look more deeply into it. If black people are more engaged news consumers than white people, maybe there’s a good reason they choose MSNBC over Fox News and CNN, so while Byers, Wemple, et al, can’t change the fact that they’re white, they could at least try to find out why.

Update: I didn’t even see this, and don’t even know where to begin.