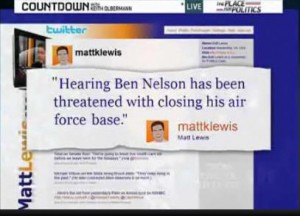 On last night’s Countdown, Keith Olbermann ran a segment attempting to debunk the story that the White House had threatened Senator Ben Nelson (D-Nebraska) with closure of Offut Air Force Base in order to secure his vote on healthcare reform. The White House and Ben Nelson categorically deny the charge.

He attacked the apparent sources of the story (Matt Lewis and Michael Goldfarb), and the 20 Senators who are now calling for an investigation. Who’s right, and who’s wrong? Plus Mediaite has exclusive reaction from Lewis and Goldfarb.


Olbermann is correct to point out that the alleged base-closing couldn’t happen until 2013, but that doesn’t mean the threat wasn’t made. He also references a “partial retraction” by Goldfarb without ever explaining what it was. I asked Goldfarb for his reaction to the segment, and if he knew what retraction Keith referred to: (via email)

There was no retraction. I stand by the story and am confused as to where that came from. My only response to Olberman is that I was disappointed I didn’t make Worst Person in the World.

A source at MSNBC points to an interview Goldfarb gave to Glenn Beck.

I also reached out to Matt Lewis, whose response was amusingly similar: (via email)

A reliable source leaked this information to me, and until proven otherwise, I stand by my source. My only regret is that Olbermann has yet to name me his ‘Worst Person in the World’.

Keith, if you’re reading this, a fitting response might be to put them on your “Best Persons” list. Just a suggestion.

This comes down to “Who do you believe?” Lewis and Goldfarb each have an anonymous source (Mediaite has learned that they did not both use the same source) saying that a threat was issued. Nelson and White House Communications Director Dan Pfeiffer both deny this. Me? I like to believe everyone.

It’s important to note that Matt Lewis didn’t write an article about it, he simply sent a tweet. The degree to which this insulates him from criticism is a new conversation. While I might not have done the same, even a moderately critical thinker could easily evaluate Matt’s tweet on the merits, and suss that it did not, and wasn’t intended to, carry the weight of a news report.

I would further note that I know Matt well enough to know that he’s certainly not making it up, nor is he the type to repeat the utterance of a suspect source. He definitely heard this from someone he believes. Even knowing nothing about Matt personally, just read him or watch his TV appearances. He’s the model of a moderate voice, he doesn’t try to push the ball.

Goldfarb, on the other hand, did write an article about it, and cited a (presumably Republican) Senate aide:

As our source put it, this is a “naked effort by Rahm Emanuel and the White House to extort Nelson’s vote.” They are “threatening to close a base vital to national security for what?” asked the Senate staffer.

Although Goldfarb clarified this later, a careful reading of the quote reveals that his source never actually says the threat came from Rahm Emanuel. This is too cute by 3/4 if it’s being run by a news organization, but Michael Goldfarb is a political blogger. The sourcing is clearly labeled, and its value as news should be easy to evaluate. By blog standards, he’s well within the lines.

My best guess is that there is some kernel of truth here, some kind of exchange happened between someone from the White House and someone from Nelson’s, probably too far down the food chain to be on Nelson’s, Pfeiffer’s, or Emanuel’s radar.

The real problem here, and where Olbermann hits the nail on the head, is the 20 GOP Senators who are now calling for an investigation. In a letter to the Senate Armed Services Committee, they call for a hearing based on “various media reports.”

These are grown men, members of the US Congress’ most deliberative body. They can’t tell the difference between a tweet/blog post and a credible news report? They really want to waste the time and expense of a hearing on what is a clearly-labeled rumor about a demonstrably empty threat?

As far as I can tell, everyone else here is just doing his respective job. These 20 Senators should stick to theirs.