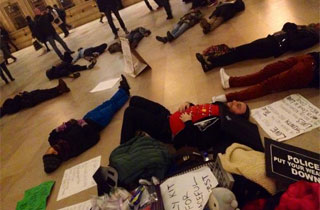 As New Year’s Eve approaches, the Boston Police Department is preparing for an inevitable wave of people protesting the police by staging “die-ins,” and, thankfully, Boston is acting rather rationally: In a press conference, Boston Police Commissioner William Evans only cautioned the protesters to please, please don’t traumatize the thousands of children turning out for First Night by pretending to die dramatically.

“We’re going to accommodate the protesters if they choose to do so. But we will not let it disrupt the events,” he said, according to ABC. “I can only appeal that if people are going to demonstrate, just realize there are a lot of young kids out there, a lot of families.”

First Night, one of the oldest New Year’s Eve events in the country according to city officials, is a magnet for children in the Greater Boston Area and one of the biggest family-friendly events of the year (it ends around 10 PM and has about 80 gajillion ice sculptures and street performances.)

A group called First Night Against Police Violence plans to protest during a parade this afternoon, and commissioner Evans promised to let them protest peacefully, but also, think of the children:

“We’re going to protect their right to demonstrate and, hopefully, we can both make this event a successful event,’’ commissioner Evans said. “First Night is a long tradition in the city. I hate to see anything spoil what is usual a great family fun night in the City of Boston.”

Evans urged activists to remember that young children and toddlers will be in attendance at the family event. Pretending to die could be traumatic for them, Evans added, and urged protestors to be mindful with a public plea, “please don’t upset these young kids’ night.”