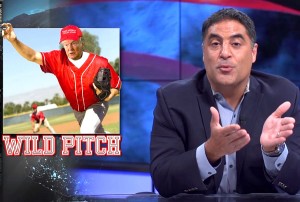 The Donald Trump Lowered Expectation Syndrome that has infected the “objective” political media appears to have spilled over into the most progressive corner of the media, as well. The Young Turks host and co-founder Cenk Uygur took notice of Trump’s explicit appeal to Bernie Sanders supporters during Wednesday’s sustained attack on Hillary Clinton, and while he doubts it will work on “the most liberal people in the country,” he also kinda thinks it might work. It’s a twisty, nuanced argument that he’s making, full of qualifiers and disclaimers, but there’s one specific factual claim that stands out:

Again, it’s a long and complicated argument that you should watch all of, and there are parts where Uygur correctly argues that Trump could conceivably fool a good chunk of general election voters, but I don’t know how it makes sense to say that the most liberal people in the country would never vote for Trump, so go get those voters before Trump does. To be fair, I think the entire point of this rant is based in an honest desire to see Sanders’ supporters have an outsize voice in this election, and who wouldn’t want that? Regardless, it is a fact that even if Trump can’t woo Sanders supporters, every one of them that stays home is a little win for Trump. How much of a difference that ends up making is a matter of debate.

But that claim, that Donald Trump is “doing more to try to appeal to Bernie Sanders supporters than Hillary Clinton is,” is verifiable. Let’s set aside the mountain of policy contrasts that exist between Hillary Clinton and Donald Trump, many of which Bernie Sanders referenced in his online address to supporters last week, and just focus on explicit references to Bernie Sanders and his supporters. Let’s also ignore, for the moment, that the substance of Trump’s appeal is garbage, as Uygur himself acknowledges. Trump isn’t actually apart from the “rigged” system of money in politics, he’s just bad at it, and his record on trade consists of having his products made in China.

Even ignoring all of that, Hillary Clinton has, in fact, “do more to try to appeal to Bernie Sanders supporters” than Donald Trump has, and she did it even as she was securing the victory that Senator Sanders still refuses to acknowledge. In her victory speech two weeks ago, Hillary led off with this rather explicit appeal:

I want to congratulate Senator Sanders for the extraordinary campaign he has run. He has spent his long career in public service fighting for progressive causes and principles, and he’s excited millions of voters, especially young people. And let there be no mistake: Senator Sanders, his campaign, and the vigorous debate that we’ve had about how to raise incomes, reduce inequality, increase upward mobility have been very good for the Democratic Party and for America.

This has been a hard-fought, deeply-felt campaign. But whether you supported me, or Senator Sanders, or one of the Republicans, we all need to keep working toward a better, fairer, stronger America.

In the balance of that speech, Hillary detailed a raft of policy ideas that appeal directly to Sanders’ supporters, such as overturning Citizens United, affordable college education, expanding social security, and freer, more open elections. Since then, she’s repeatedly reached out to Sanders supporters in a similar fashion. Now, it’s certainly fair for Sanders supporters to wish for and demand policies more closely aligned with those of Bernie Sanders, but to say Trump has done more is patently false. Obviously, Hillary isn’t telling them enough of what they want to hear, but that doesn’t mean you congratulate Donald Trump for telling them any of what they want to hear, and lying in the process.