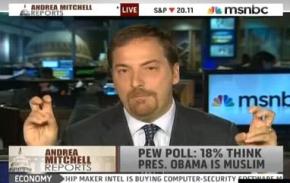 President Obama is beginning his vacation today, but according to Chuck Todd, it’s actually more of a vacation for Pres. Obama’s staff.

Also, in the wake of the poll today highlighting all the confusion about Pres. Obama’s religion, Chuck Todd wants to make clear the quote-unquote media is very large – and not in a good way.

The vacation that’s needed by this President is really the staff itself, the West Wing, I think is in desperate need of a vacation. You can tell with just how frayed, and how on edge some of them are, Andrea, you know as well as I do in dealing with some of these people.

Todd points to Robert Gibbs‘ professional left comment as evidence of this, and says the administration needs “a vacation from each other.”

But then there’s the polls that say just how few people trust the media – just as we’re learning how many people think Pres. Obama is Muslim. “How do you define media?” asks Todd. There are “actual journalists, like what we do,” and then there’s the others: “talk radio” and “infotainment things you see in some of these other television broadcasts” and “even forwarded emails.”

Todd has a solution:

Maybe this means the President is going to have to publicly go to church and they have to see it more, the public has to see it. That seems ridiculous but in this day and age of how the media now is defined by everybody across the board, whose got a Twitter feed, or a talk radio program, then that may be the only way they combat this.

Do you have a Twitter feed? You may be part of the problem, people: