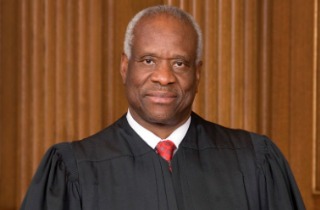 Justice Clarence Thomas was among the four justices who dissented on Friday against removing state bans on same-sex marriages. Thomas has a reputation for being one of the most conservative justices of the Supreme Court, and when Thomas delivered his scathing dissent, he included several bizarre remarks invoking slavery.

Thomas’s dissent took issue with the concepts of “liberty” and “dignity,” arguing that the petitioners were not deprived of their liberty by government intervention, and that the Constitution offered the government no authority to remove or instill a person’s “dignity.”

Thomas brought up the Declaration of Independence’s words about all men being created equal, and said that that principle applied even to African-Americans who were once kept as slaves:

Thomas added that he was concerned that the majority decision would take effect with “inestimable consequences for our Constitution and our society.”

“Today’s decision casts that truth aside,” Thomas wrote. “In its haste to reach a desired result, the majority misapplies a clause focused on ‘due process’ to afford substantive rights, disregards the most plausible understanding of the ‘liberty’ protected by that clause.”