Clinton Supporters: Criticizing Hillary For Wearing a $12,000 Jacket is Sexist 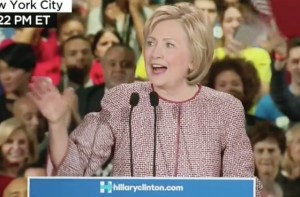 The New York Post reported Sunday that when Hillary Clinton gave her New York primary victory speech– heavily-laden with messages about income inequality– while wearing a $12,000 Giorgio Armani jacket. The jacket, they reported, was part of a larger decision on the part of her image consultants to dress her in more designer labels: “Factoring in the designer labels she’s wearing, plus the number of new outfits she’s been photographed in over the past year, she’s likely spent at least $200,000 on new clothes to wear on the campaign trail.”

Now you might think it’s obvious why the story was newsworthy and why it spread quickly among conservatives and Bernie Sanders supporters: there’s a certain hypocrisy to preaching about income inequality while wearing a jacket that’s worth what the average American earns in months (and what a paid Clinton speech earns in minutes). But some observers diagnosed the real reason the story went viral: you’re all a bunch of sexists.

The gist of the arguments are all the same: women are held to a double standard that men are not, with every bit of their appearance scrutinized and mocked. This is yet another instance of a high profile woman being shamed for their wardrobe, along with Michelle Obama and Sarah Palin in 2008. Why, all three editorials argue, doesn’t a male politician like  Donald Trump earn the same scrutiny for wearing suits that are almost certainly as expensive as Clinton’s jacket?

All agree that the criticism of Clinton’s jacket is sexist to one degree or another. To which I have two words: John Edwards.

For those who don’t remember, Edwards ran in the 2008 Democratic primary primarily on an anti-poverty platform, famously promising to end poverty as we know it in American in only thirty years. That storyline hit a bump however when it was discovered that he and his campaign spent $400 a pop for his haircuts. For the remainder of the campaign (and until his infidelity became public), Edwards’ exorbitant haircuts were the go-to punchline for late night hosts and pundits.

Edwards was mocked for the same reason Clinton was: they were hypocrites. They went around portraying themselves as ordinary Americans who live average lifestyles (“dead broke” in Clinton’s case), while in reality they live a sheltered existence and pay obscene amounts for unnecessary luxuries. Scrutiny of their appearance had exactly zero to do with gender roles, the patriarchy, or [insert buzzword here], and everything to do with a glaring double standard.

That’s also the reason the prices of Donald Trump‘s suits aren’t scrutinized: he’s never run as anything other than a flamboyantly rich jerk. While Hillary Clinton visits diners in Iowa, he flies around voters in his helicopter. It’s really more surprising that he himself doesn’t constantly brag about how expensive his suits are, a la George Oscar Bluth. In short, there’s no double standard at play because Trump has never pretended to have any standards at all.

Back to the sexism angle, I found this particular assertion from Mic laughable:

Clinton recently hired a team of image experts, one of whom worked with Michelle Obama, that are in charge of taking her style and dress and making it more relatable. When’s the last time you heard a rich man attempting to do the same? (That’s right. Never.)

“Never”? How politically naive do you really have to be to think that male presidential candidate don’t also pay through the nose for fleets of image consultants? Does anyone really think that Barack Obama just raided his closet, packed a suitcase, and hit the campaign trial? Every aspect of a candidate’s appearance and wardrobe is micromanaged by his or her campaign. We know for a fact that at least one “rich man” hired image experts: Mitt Romney kept one guy on retainer just for his hair.

Only female candidates are scrutinized for their wardrobe and appearance? That’d be news for Marco Rubio, who had two separate front page New York Times stories over the fact that he wore boots. Or Obama, who sparked a minor Beltway freakout when he wore a tan suit. Or Romney, mocked for his “mom jeans.” Or Scott Walker and his bald spot. Or John Kerry and his botox. Or Trump and his fingers, and his hair, and his face, and his, uh, other body parts not generally seen by the public.

Running for office means every aspect of your life is pored over and mocked, and yes, that includes your outfit, and yes, that applies to men and women both. It’s not “sexist” to mock Clinton for wearing a $12,000 jacket while harping on her love for the poor, just inconvenient for her supporters.