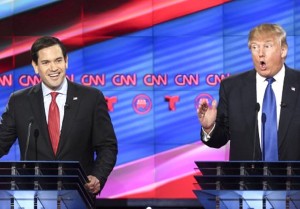 That’s about the only two words that come to mine upon absorbing the hot mess that was the 10th GOP debate on this primary season on CNN. Control from moderator Wolf Blitzer was fleeting (not necessarily a bad thing at times), Ted Cruz and especially Marco Rubio were feisty, while Donald Trump was thrown off his game and got hit more than a few times… much like Mike Tyson later in his career when the intimidation factor was gone. It was Jersey Shore meets British Parliament meets the old Crossfire on PEDs. And when the dust settled over Houston, the only one with a smile on his face was Ben Carson. A bizarre night only fitting for a bizarre election…

As is tradition, let’s hand out the report cards, starting with CNN:

Wolf Blitzer: I like Wolf fine. He’s a classic traditional anchor and really the only remaining connection back to CNN’s glorious rise in the 1990s following the first Gulf War. But Wolf is a Swiss army knife of veteran anchors, and therefore more a big breaking news steady hand than political animal. It is understood that CNN likes to rotate its talent in debates to showcase various on-air flavors while offering up some variety to candidates and audiences alike. But in retrospect, and playing Friday Morning quarterback is easy, John King — a guy who eats, sleeps and breathes politics and likely could name and characterize every county in every key state in the country — should get a nod if/when CNN somehow gains another debate or Town Hall down the road.

All of that said, as noted above, it wasn’t necessarily a bad thing that Blitzer let the candidates go at each other — even question each other — when he did. Those moments produced the most raw, passionate (albeit difficult to understand at times) and unscripted moments of the evening, particularly between Rubio-Trump and Cruz-Trump. The GOP campaign has been a UFC fight all along thanks to the unfiltered tone set by Trump. So… if that extends to the debate stage, it’s almost fitting.

But that doesn’t mean Wolf should completely taken off the leashes. There’s candid, open debate, and there’s out-of-control cacophony. It’s a difficult line to walk, but Wolf allowed matters to spill into the latter territory more than the former. Even closed captioning couldn’t handle the noise, as you’ll see here. Overall grade: C+

Marco Rubio: Two weeks ago, I called Rubio more of a caricature than candidate thanks to what appeared to be his seemingly-campaign-killing Rick Perry moment via almost-robotic repetition in an ABC debate before the New Hampshire primary (where he’d finish a disappointing 5th). Note: Rubio always had an underlining issue around gravitas. Call it age, height, inexperience, a not-so-commanding voice or presence… but the perception is real. Still, the Florida Senator usually compensated with sterling debate performances via impeccably prepared and bullet-point precision. But then the lather, rinse, repeat moment in New Hampshire happened on a huge stage. It went viral. The boy in the bubble apparently exposed. Given the wind already in his face and Trump creating an even bigger lead over a fractured field, it looked over for the 44-year-old.

So while last night’s kidney punches to Trump were both surprising and solid, it may still be too little, too late. Even Glenn Beck — who fasted for Ted Cruz earlier in the week, was impressed (leading to this Tweet that others seemed to enjoy by yours truly).

Back to Rubio-Trump, here’s some key exchanges:

Rubio: So there’s a statute of limitations on lying?

But one of the most explosive exchanges between Trump and Rubio came when the candidates were asked to discuss their health care plans.

Trump said he would eliminate barriers (“lines around”) between states — something he and many Republicans say would increase competition and thereby reduce cost. But Rubio kept asking Trump for actual details:

Rubio: “What else is a part of your health care plan?”

Trump: “When you get rid of the lines, that brings in competition…”

Rubio (still amused): “I saw you repeat yourself five times five seconds ago!”

Unfortunately for Rubio, this will bring very few Trump supporters over to his side. And with four other candidates splitting 55-60 percent of the vote for now, he won’t gain the traction needed. Rubio’s biggest opponent right now is time. And the longer everyone else sticks around, the fewer votes there are to pick up when trailing by three touchdowns. Overall debate grade: A

Donald Trump: Got exposed more than he ever has on lack of detail, particularly around healthcare and tax plans. Actually became the punchline a few times via Rubio and Cruz instead of making his opponents one, as is usually the case. But shrewdly showed he already has an eye on the general via his pro-Planned Parenthood stance and willingness to stay neutral on Israel-Palestinian negotiations, which is (for lack of a better word) brave statements to make on a GOP primary stage. Despite setbacks/moderate-to-liberal stances and uneven performance, will still roll through Super Tuesday on his way to a likely nomination. Grade: C-

Ted Cruz: Showed why he’s a world-class debater. But again showed that while he has somewhat successfully branded himself as an outsider, there’s something very politician-like about his oratory. The dramatic pauses before the end of sentences, the soaring rhetoric. Obama pulls that off. Clinton did. Reagan did. Cruz can’t, and sounding like a politician is not something any candidate wants right now. That said, Cruz also landed some body blows on Trump, particularly around donations to Democrats and audits around past tax returns. But this election is about personality more than policy, symbolism over substance. And on that scorecard, Cruz loses regardless of debate acumen. Grade: B

Ben Carson: Easily had the line of the night after becoming frustrating for being largely ignored again: “Can somebody attack me please?”. A great surgeon general one day, no doubt. Grade: Incomplete

John Kasich: The pragmatist in the room once again. Sticks to his principles around compromise, compassion and economic growth via lower taxes and balanced budgets. Right candidate, wrong time. And your likely VP candidate for Trump, which would be the toughest white collar job in America (candidate/defensive press secretary) as discussed here earlier in the week. Trump didn’t lay a hand on Kasich, even respectfully referred to him as “The Governor” several times. Kasich didn’t join Cruz and Rubio in attacking Trump. Think about that for a sec. Grade: B+

A hot mess in the state we’re told not to mess with. The wheels completely came off Thursday night. In this reality TV show of an election season, the insanity only made perfect sense.