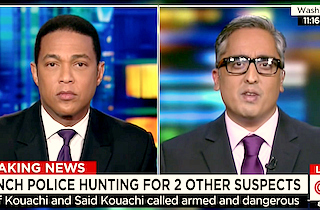 Last week, CNN anchor Don Lemon asked Muslim-American human rights lawyer Arsalan Iftikhar if he supports ISIS. Iftikhar was taken aback and asked, “Wait, did you just ask me if I supported ISIS?” He didn’t dwell on it and just moved on, but Iftikhar followed up in a post on The Islamic Monthly yesterday about the very awkward moment.

Iftikhar had figured he had sufficiently condemned the actions of radical, violent Muslims, and so when Lemon asked, “Do you support ISIS?”, he thought he had “misheard” because “surely there was no respectable journalist in the world who would ask a Muslim human rights lawyer whether he supports an organization which violates human rights each and every day.”

He continues, “But then I remembered that I was dealing with Don Lemon.”

From there, Iftikhar gives Lemon quite the roasting, bringing up his “worst in journalism” award from the Columbia Journalism Review last month and bringing up some of his more infamous awkward moments.

It is a sincere honor to be added to the litany of famous “Malaysian-black-hole-penis-biting” Don Lemon media gaffes which can be added to his audition tape for his next job at FOX News Channel.

So from the bottom of my heart, I want to publicly thank Don Lemon for making me famous with his patently offensive racist dumb-ass question.

And you can watch the infamous moment here, via CNN: