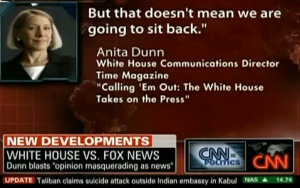 Last week news broke that the White House was not just annoyed by the way that FNC has been covering the current administration, but they were also upset that other mainstream outlets have not been especially diligent when fact-checking Fox News. It was a stunning moment in which CNN was not only forced to cover their competition, but they also sort of partly credited FNC’s dominating ratings on the White House.

Wolf Blitzer opened the discussion by asking David Gergen if he considered it a smart strategy for the White House to openly call out Fox News. “Its a risky strategy,” he claimed, “and it’s not one that I would advocate.” He continued (echoing thoughts expressed on Mediaite) “If you are going to get very personal against the media you’re going to find that the animosities are just going to deepen, and you’re going to find that you are almost going to draw viewers to people you are attacking. You build them up in some ways, you give them stature.”

Gergen makes some sense, but given the recent and rather stunning decline in CNN’s own viewership, one could easily see this as sour grapes. Perhaps more accurately, the fact that CNN’s covering the affect of opinion journalism is the best indication that traditional journalism is one step behind the opinion media. Which is probably the best explanation of why CNN is getting lapped by FNC.