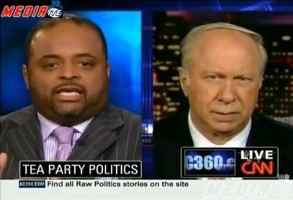 On AC360 last night, CNN pundits Roland Martin and David Gergen spoke to different sides of the allegations of racial epithets being used during a Tea Party protest outside of the Capitol building last month. The back and forth was insightful, but also begged the question: If there is no video proof, do we no not believe the words of an elected official and civil rights hero?

During the March weekend that health care passed there was lots of Tea Party protesters on Capitol Hill, and some ugly accusations of slurs thrown towards African-American members of Congress. Since then, there has been a rather intense debate whether or not the “n-word” had been used, as was alleged by Rep. John Lewis (D-GA).

Recently, Andrew Breitbart got into the act, and offered a donation of $100k to the United Negro College Fund to anyone who could prove with video that these allegations were not, in fact, baseless.

Martin suggested that, even if no proof was offered, that this was a pointless tact, since it only served to subtly reinforce the notion of racism within the Tea Party movement. Gergen countered that, accusations of racism are not to be dismissed so cavalierly – that Breitbart and other Tea Party leaders are smart to clear this up.

Part of the wonder – and challenge – of the Tea Party movement is that its been a fairly organic, if not, disorganized movement. Like any large group of individuals, its not fair to judge them by the actions of a few.

Have racist signs been held at Tea Party events? Yes they have (even by self-proclaimed leaders of the movement.) We’ll likely never know if someone shouted the n-word towards Lewis. But just because video does not exist of said allegation, does not mean that its without merit.

Video below (edited for time):