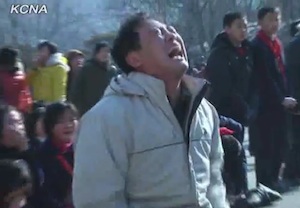 We’ve seen some Hollywood directors/activists produce hard-hitting documentaries in the past (or plan to) that are anti-something.

Harvey Weinstein, for example, told Howard Stern earlier this year about his plans on doing an anti-NRA film with Meryl Streep that will make the organization “wish they were never alive.” Michael Moore did the same with the award-winning Bowling for Columbine in 2001. Dinesh D’Souza explored what he felt was the president’s worldview in 2016: Obama’s America, which became one of the highest-grossing political documentaries ever. And Robert Redford did an anti-war film released at the height of the conflicts in Iraq and Afghanistan in 2007 with Tom Cruise and the aforementioned Streep in the forgotten Lions for Lambs.

Dozens of other examples like this are out there, but here’s the point: In light of the Sony hacking and subsequent cancellation of The Interview, why haven’t we heard anyone in Hollywood declare he or she is planning on doing a full length feature film on the horrific conditions that actually exist inside North Korea? As you may have heard, its citizens are starving and human rights are non-existent. As for foreign relations and trade, North Korea’s reclusive regime seems more than happy being isolated from the rest of the world (outside of China, anyway). Consequently, only the poor citizens of a country it can’t leave suffer…sometimes to the point of losing their lives.

Think about it: If the North Koreans are really this outraged about a comedy film, they’ll definitely not like a big-time movie that focuses on exposing the actual realities happening inside the DPRK. And by committing to such a project with the same passion applied to taking on political enemies here at home, it would obviously send the right message out of Hollywood (which has never looked more limp) and the country as well: The United States will not be bullied, cyber-bullied or otherwise. And it can only be effective in getting their attention if the reach of Hollywood’s marketing and advertising machines are unleashed to hype the hell out of it.

As far as the threats that will predictably come, ask yourself how many times that country has threatened to obliterate ours in the past without carrying out a damn thing. Remember, a Geek Squad hacking a movie studio is not ISIS or Al-Qaeda…

So just how bad are things north of the 38th parallel?

One in four children suffer from chronic food insecurity and hunger, according to the UN.

The same UN report also says, “Supplies of medicine and equipment are inadequate; water and heating systems need repair, and the infrastructure of schools and colleges is deteriorating rapidly.”

Earlier this year, the United Nations Commission of Inquiry’s Report (a separate study) “contains so many tragic findings that it is difficult to grasp the scale of the crimes described,” according to the New York Times. In it, Dear Leader Kim Jong-un isn’t exactly portrayed as a fiscal conservative, spending $645,800,000 alone in 2012 alone on “luxury goods,” including cosmetics, handbags, leather products, watches, electronics, cars and top-shelf alcohol. So even if aid is increased to North Korea as a sign of goodwill and to help starving children, there’s a good chance Jong Un is going to blow it all on Maker’s Mark and Maseratis anyway.

Of course, this demented style of governing runs in the family, as Jong Un’s father, the late Kim Jong Il, presided when possibly up to 2.5 million people were victim of the country’s great famine on the 1990s (Note: North Korea’s entire population is only 24 million). One defector even testified that Jong-Il spent nearly $800 million on a mausoleum for North Korea’s founder, Kim Il-sung, while tens of thousands were dying by the month. In a related story, that $800 million would have sufficed in closing North Korea’s food shortage for 48 months. But when a mausoleum is needed….

So obviously, there’s lots of material for a Weinstein or Moore or even a Martin Scorsese or Barbara Kopple to work with here (there are dozens of documentary director candidates to choose from). And given its silence on Sony’s handling of the North Korea situation (and no, a few tweets here and there expressing outrage doesn’t exactly count), Hollywood needs to step up here and do a movie that truly exposes the evil that is the North Korean government.

This can be accomplished via interviews with defectors and the best experts on all-things-DPRK, and using whatever footage of the atrocities is available. Oh, and if Jong-un turns to the usual empty threats issued as if a 24-second clock is being enforced, call the bluff by simply ignoring the bully and moving ahead with the movie with resolve and purpose…the kind that comes with telling North Korea that no one dictates to the U.S. what kind of content it can and cannot distribute.

Tinseltown has applied its talent and power in the past to make some damming documentaries when it comes to those deemed domestic enemies. Just think of the possibilities if that energy was used for a more noble purpose…