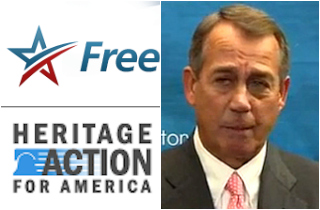 House Speaker John Boehner went after conservative lobbying groups in no uncertain terms Wednesday morning, declaring that the groups reflexively opposing the just-negotiated budget deal were “using our members and they’re using the American people for their own goals.”

It didn’t take long for conservative groups to snipe right back.

Matt Kibbe, president of FreedomWorks, fired out a press release:

“Speaker Boehner’s real problem here isn’t with conservative groups like FreedomWorks, it’s with millions of individual Americans who vote Republican because they were told the GOP was the party of small government and fiscal responsibility.

“Once again Republicans, led by John Boehner, are working with Democrats to increase spending yet again on the taxpayers’ tab while promising ‘savings’ down the road. We know how this movie ends. How can leadership credibly promise spending cuts later, after agreeing to a plan that rolls back the sequester savings promised two debt increases ago? There’s a predictable pattern here.”

“Americans are deeply concerned about the direction of the country. Over the next few days, lawmakers will have to explain to their constituents, many of whom are our members, what they’ve achieved by increasing spending, increasing taxes and offering up another round of promises waiting to be broken. That will be a really tough sell back home. Meanwhile, we’ll continue fighting to achieve our goal, which is create an America where freedom, opportunity, prosperity and civil society flourish.”

Watch the original segment below, via MSNBC: