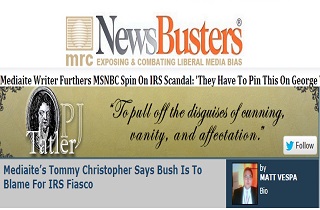 Last week, GOP strategist and frequent MSNBC guest Ron Christie got a bad case of The Fonzies, and couldn’t quite bring himself to say that George W. Bush appointed former IRS Director Doug Schulman, who oversaw the agency while it was targeting conservative groups for extra scrutiny. With a little help from Joy Reid and Martin Bashir, Christie finally croaked out the words “the previous administration” as Schulman’s appointer. Now, no less than two conservative websites are accusing me, and MSNBC, of blaming Bush for the IRS mess, based on that clip, and my commentary on it.

In case you missed it, Ron Christie was trying to make the case that the IRS imbroglio is the result of an “Obama administration culture,” which prompted Joy Reid to place Christie in a “Who appointed Schulman?” half-nelson, until Martin Bashir stepped in and made her let go so Christie could answer:

The point that Joy and I were trying to make is that, in order for Ron Christie’s premise to hold, that an administration culture is responsible for the IRS’ conduct, then the top political appointee at an apolitical agency would  have to be the driving force behind that. In this case, that appointee was a George W. Bush appointee, so under Ron Christie’s theory of the case, it would be a Bush administration culture that led to the misdeeds, not Obama.

From that bit of commentary, Newsusters‘ Matt Vespa (just don’t call him “Scooter”) concludes that “Mediaite Writer (that’s me) Furthers MSNBC Spin (that’s Joy Reid, I guess) On IRS Scandal: ‘They Have To Pin This On George W. Bush'”:

You just knew this was bound to happen. Some on the left are trying to blame George W. Bush for Obama’s IRS fiasco. Take for example Mediaite’s resident Obama apologist Tommy Christopher, who wrote a much ado about nothing post on May 16 insinuating that this egregious abuse of government power stems from former Bush appointed IRS Commissioner Douglas Shulman – and that credit for clearing this whole thing up will go to Obama.

Here’s what I actually said (emphasis mine):

Christie continued to argue that the IRS is not independent, because the President was able to fire Miller (or to demand his resignation), but that’s the key difficulty that the President’s opponents will have with this scandal, going forward. In order to argue that the misconduct was the result of an administration culture, they have to pin this on George W. Bush, but the credit for fixing it will all go to President Obama.

It’s my view (and Joy Reid’s, if I’m reading her correctly) that the IRS controversy is not a political scandal, it’s a bureaucratic one. Based on the available facts, there’s no evidence to suggest otherwise. The extent to which the IRS operates independently from the White House, ability to demand resignations notwithstanding, is what makes this a bureaucratic scandal, and not the reincarnation of Nixon’s enemies list. If Republicans like Ron Christie continue to insist that an agency run by a Bush appointee ran amok on Obama’s orders, without any evidence, then they’ll look foolish. The President will have an opportunity to gain politically by fixing the problem quickly and decisively.

Earth to Christopher: this isn’t a partisan issue. In fact, Democrats and Republican alike are furious over this bureaucratic nightmare.

It reeks of Nixon, which has left a sour taste in the mouth of liberals.

I get it. Matt Vespa (like much of the mainstream media, to be fair) has no idea what Nixon’s “enemies List” was.  It was not a “bureaucratic nightmare,” it was a political hit squad. Based on the available evidence, this is not that. It was Ron Christie’s premise that an “administration culture” was behind the current fiasco, not mine, and not Joy Reid’s. I was simply pointing out the glaring, self-defeating flaw in it. If the President’s opponents really want to get some mileage out of this, they ought to either let the facts catch up with Terry Moran‘s imagination, or focus on the urgency and efficacy of his response.

Newsbusters wasn’t the only conservative outlet to pounce on this. PJ Media also took up the cause, and after block-quoting eleven paragraphs of my column, came to this eerily familiar conclusion:

Really? So, because this current administration is in the suck, the left has resorted to blaming Bush – again?

No, as I said before, that was not what I was saying, PJ Media’s Matt Vespa. Wait, what? The same guy wrote two different commentaries, for two different websites, about my column on last week’s Martin Bashir show? I have to say, I’m impressed, and a little bit flattered. That’s a good hustle. One stone, two differently-worded birds, two paychecks. I figure it’s only fair that I get one more piece of content out of the deal.