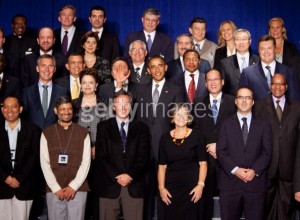 The intrepid conservative sleuths at The Blaze and Pajamas Media have cracked the case of the possibly photoshopped, allegedly “embarrassing” picture of President Obama waving during a photo-op, and obscuring another world leader’s face in the process. The photo is real!

While this might seem too petty to make The Blaze‘s lead story, the picture does look oddly fake, but is it really all that “embarrassing?”

The photo in question was taken by a pool photographer at yesterday’s Open Government Partnership Event, and it does look weirdly fake. The President’s head is tilted at an odd angle, and his forearm seems to spring up too far from his body. Alas, as the Getty Images watermark indicates, the photo was not altered after publication.

If it was, it would be an awful lot of effort to go through for very little return. Just how “embarrassed” should anyone be about this? Thankfully, I’ve already written this article, only it was in defense of Michele Bachmann:

In three years of covering the White House, I have accumulated hundreds of rapid-fire shots of President Obama, for example, and there are lots of them that freeze odd-looking moments (a cough, a blink) that look jarring out of context. I’m sure all news photographers do. That’s why they take so many shots, so that they (or their editors) can select the one that best conveys the truth of the moment.

There were three pool photographers at yesterday’s event (from the AP, Reuters, and Bloomberg), each of whom probably shot fifty or more pictures of that group pose, like this one: 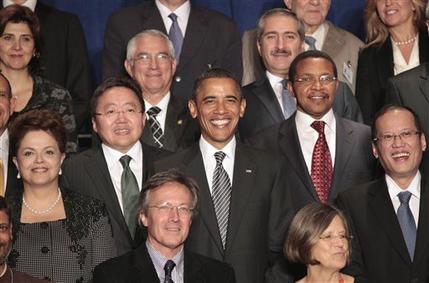 There’s no way to tell what happened in that photo, either. Maybe someone was throwing a shoe at the guy. Or maybe someone waved at the President. I know, how plausible is that?

In any case, this is a prime example of right-wing hysteria run amok. From The Blaze:

An alleged photo of President Obama reportedly taken yesterday has started to make the rounds. No, it’s not another Obama halo pic, but rather it shows the president striking an embarrassing pose. While standing with other leaders during an Open Government Partnership event, Obama can be seen waving to the camera. The only problem? He’s the only one — and he‘s covering another man’s face.

Let me get this straight: Now conservatives want the President of the United States to be subject to an “international test” over whether or not he waves?

They support every war that a Republican ever started, but not only did they oppose President Obama’s decision to bomb Libya, now they’re even getting on his case for photobombing other countries.

It could be worse, I suppose. At least they’re not accusing the President of assault.