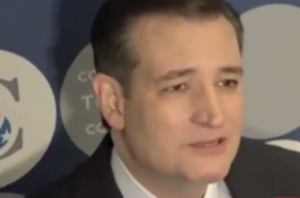 Ever since Donald Trump asked attendees at one of his rallies to raise their right hands and swear to vote for him, he’s been facing major blowback from critics who noticed similarities between the photos of supporters with their arms extended and… well, here:

The Hitler-Trump comparisons have gotten responses from people who are laughing them off (Joe Scarborough) and people who are taking them very seriously (Abe Foxman, former leader of the Anti-Defamation League). Both reactions can be found here.

Today, presidential candidate Ted Cruz offered his opinion on the matter after being asked if he would ever do such a thing, but he didn’t take the “impending Holocaust 2.0” route that so many have trodden in the past few days. He spun the question in a totally new direction. Watch:

After The Right Scoop picked that up, Cruz retweeted them, adding a new layer of commentary:

No political candidate is going to make America great again. I raise my hand, and I take an oath to you, the people! https://t.co/vV4cDxkLxU

He is clearly taking a leaf from the Ben Carson playbook of “We the People” platitudes, but will it work? What do you think?