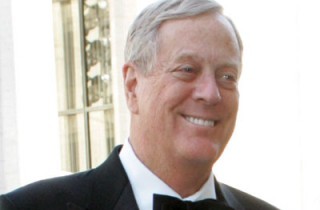 Thursday afternoon, POLITICO reported that billionaire industrialist David Koch, the oft-vilified bankroller of groups aimed at electing Mitt Romney and many Republican congressman, supports many libertarian positions that are antithetical to the Republican Party.

While this may come as a surprise to many, it’s actually quite well-known that the Kochs are socially liberal and fiscally conservative — a.k.a., “libertarian”. Koch was the 1980 vice presidential nominee of the Libertarian Party who campaigned on things like drug legalization and a non-interventionist foreign policy.

“I believe in gay marriage,” Koch told POLITICO. When reminded that Romney and the GOP oppose gay marriage, Koch said, “Well, I disagree with that.”

Koch also said that he believes the U.S. military should withdraw from the Middle East and that Congress should cut defense spending and weigh some possible tax increases as a means to balancing the budget — stances that are distinct from the Republican Party line.

“I think it’s essential to be able to achieve spending reductions and maybe it’s going to require some tax increases,” he said. “We got to come close to balancing the budget; otherwise, we’re in a terrible deep problem.” On why he would cut defense spending, Koch said: “Probably every federal department has to take cuts in my opinion. We have to spread it around.”

Koch is a board-member for the Reason Foundation (which publishes Reason magazine) and the Cato Institute. Both groups have long been vocal supporters of gay rights, drug legalization, civil liberties, non-interventionist foreign policy; and vocal opponents of things like police abuse, executive overreach, and excessive government spending on all things including the GOP’s sacred-cow military. Heck, the demonized brothers reportedly once gave $10 million each to the American Civil Liberties Union to fight the PATRIOT Act.

In fact, in some ways it is arguable that these Koch-funded organizations have done more for many so-called “progressive” causes than progressives themselves. Koch funding has helped produce countless writers who have blown the lid off rampant police abuse, exposed horrific injustices from the War on Drugs, and repeatedly criticized the foreign policy blunders of both Republican and Democratic administrations. (Disclosure: I had a paid internship with the Institute for Humane Studies, a non-profit that has received some funding from Koch charitable organizations. Not that I’ve accomplished anything on the level of Reason or Cato.)

Oh, and hey, remember Ted Olson, one of the main attorneys behind the lawsuit to overturn California’s Proposition 8 gay marriage ban? He is also a counsel for Koch Industries and a board member at the Cato Institute.

It’s fine if the left wants to criticize the Kochs for what they believe to be a “poisoning” of democracy with an influx of so much money — we can have that debate, and it would be a fascinating one. But if you’re going to take that position, then you should at least be consistent and also criticize George Soros, the billionaire bankroller of liberal causes and, consequently, the chief bogeyman of conservatives.

But actor Zach Galifianakis really should have taken note before saying he disagrees with “everything” the Koch brothers do. Remember: this is the comedian that smoked “pot” on the set of Bill Maher‘s show in support of legalization.

They are certainly anti-Obama and anti-big-government, but by no means are the Koch brothers decidedly pro-Republican. Just pro-get-this-guy-out-of-there.